How to Capture Family History in a Book of My Things – Course Countdown: Day 4 – A Wad of Fabric from my Great-Uncle’s Store in Czechoslovakia 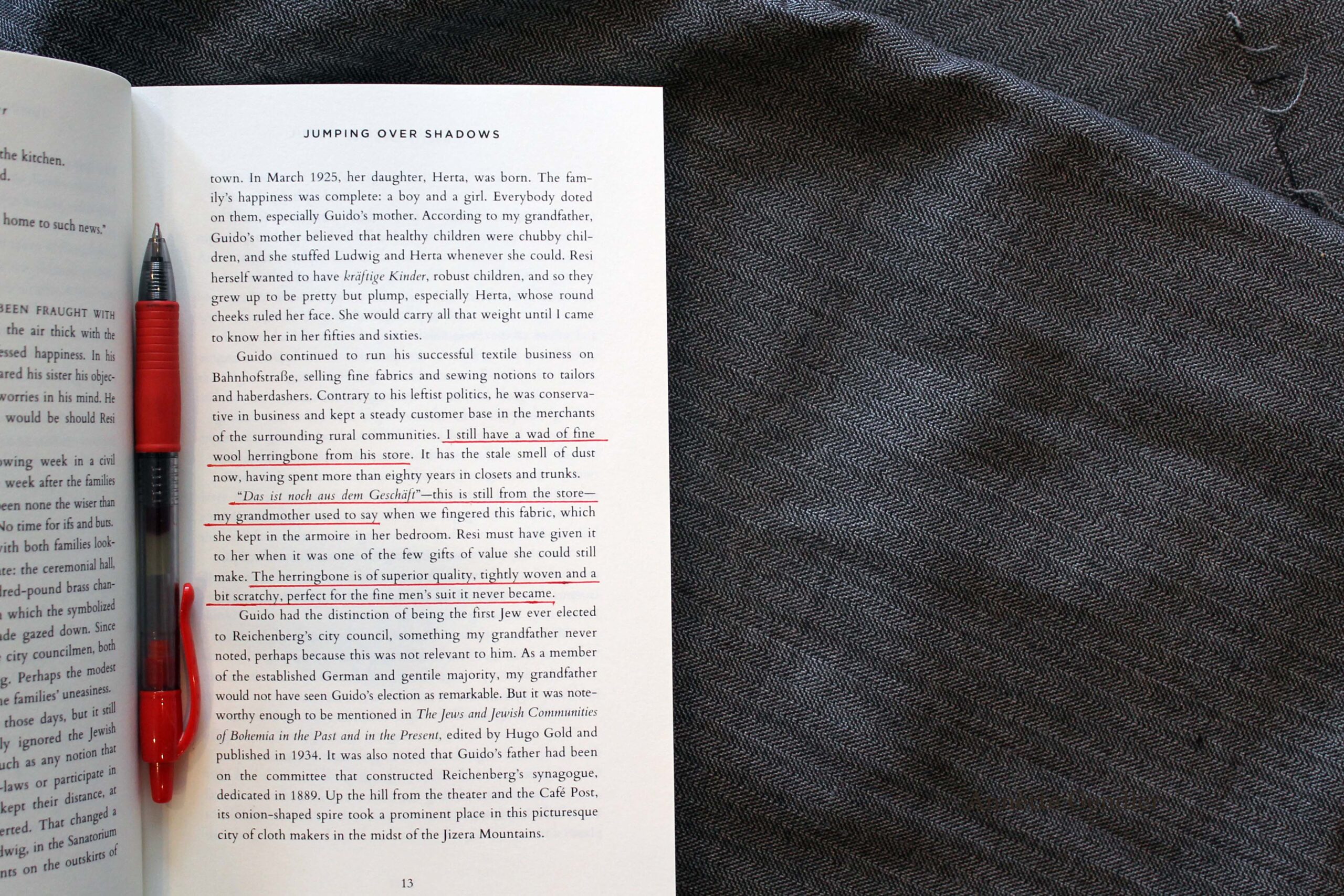 This wad of herringbone fabric dates back to the 1940s and is from my great-uncle’s store in Liberec in the Czech Republic. It is mentioned in my memoir Jumping Over Shadows on page 13.

Welcome to Day 4 of my countdown towards my online course Capturing Family History in a Book of My Things, which begins on January 16, 2022. Each day I am sharing a story about a family object, including tidbits of my process putting it together. I hope that’ll give you some ideas and inspire you to come up with your own stories. And of course I’d love it if you joined the course!

As I was writing about my parents’ steamer trunk yesterday, I remembered one of its precious pieces of content:

A wad of fine herringbone fabric, dating to the 1940s. It’s from my great-uncle’s textile store in Liberec (then called Reichenberg) in what is now the Czech Republic. 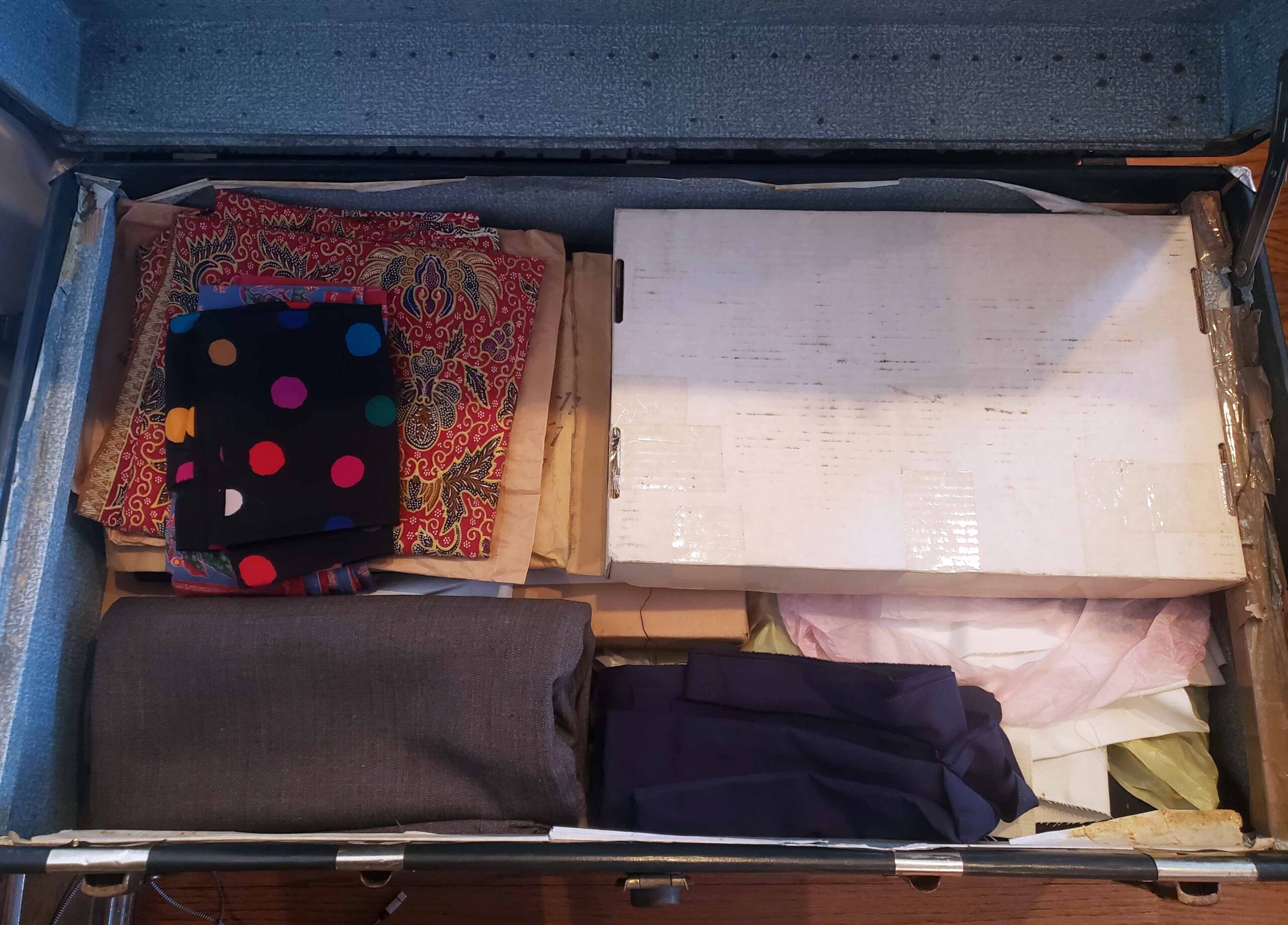 As mentioned in yesterday’s post, I store all my yet unused fabric (from my past of prolific sewing) in the steamer trunk. The herringbone from my great-uncle’s store is seen here in the lower left corner. 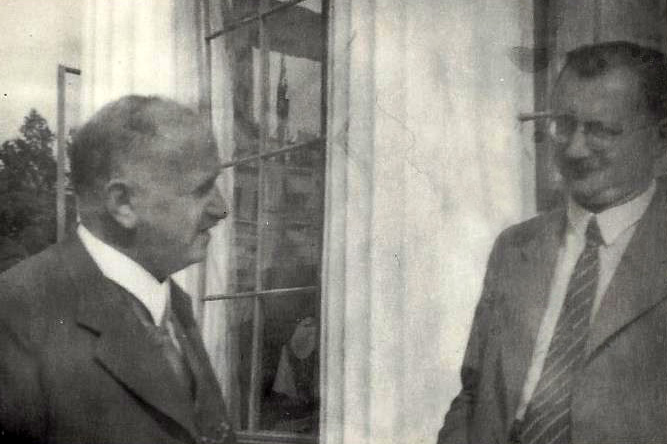 This is the only photo I have of my great-uncle Guido (left), pictured her with my grandfather Karl.

This herringbone also appears in my memoir Jumping Over Shadows, as my Jewish great-uncle Guido plays a critical role in the beginning of the book.

This passage is from page 13:

Guido continued to run his successful textile business on Bahnhofstrasse, selling fine fabrics and sewing notions to tailors and haberdashers. Contrary to his leftist politics [he and my grandfather had served as Social-Democrats on the city council), he was conservative in business and kept a steady customer base in the merchants of the surrounding rural communities. I still have a wad of fine wool herringbone from his store. It has the stale smell of dust now, having spent more than eighty years in closets and trunks.

“Das ist noch aus dem Geschäft”—this is still from the store—my grandmother used to say when we fingered this fabric, which she kept in the armoire in her bedroom. Resi [Guido’s wife and her sister-in-law] must have given it to her when it was one of the few gifts of value she could still make. The herringbone is of superior quality, tightly woven and a bit scratchy, perfect for the fine men’s suit it never became.

The story of Guido’s textile business is a particularly poignant one in my family history.

Being a Jewish business, he was prone to loose it when the Nazis took over their area of Czechoslovakia (the “Sudetenland”) in 1938. He and his wife Resi, my great-aunt, decided to divorce, ostensibly so she, as an “Aryan,” could continue to run the business. At that time Guido was already ill from diabetes, and he died in a local sanatorium in December 1938. My grandparents made all the funeral arrangements as Resi, as the divorced wife, had to keep up appearances and thus kept her distance.

More about that history in my article Filling in the Blanks on my Jewish Family History. Suffice it to say that, after my book manuscript was already finished, I did find Guido’s store mentioned in Reichenberg und seine jüdischen Bürger [Reichenberg and its Jewish citizens) by Isa Engelmann, published in 2012:

Translation: Here let’s also mention the company J.L. Knina, probably the oldest wholesale business for manufactured items in Reichenberg, founded in 1978 by the Prague merchant Joachim Ludwig Knina (1845-1903) and managed, after 1938, by his daughter-in-law Theresia [my great-aunt Resi], who wasn’t subject to the racial laws. The founder of the company had been member of the temple-building committee. His son Guido had been a Social-Democrat city councilman from 1919-1923. He died in December 1938 in Reichenberg.

It is always a good thing to find your family’s oral history confirmed in a history book! 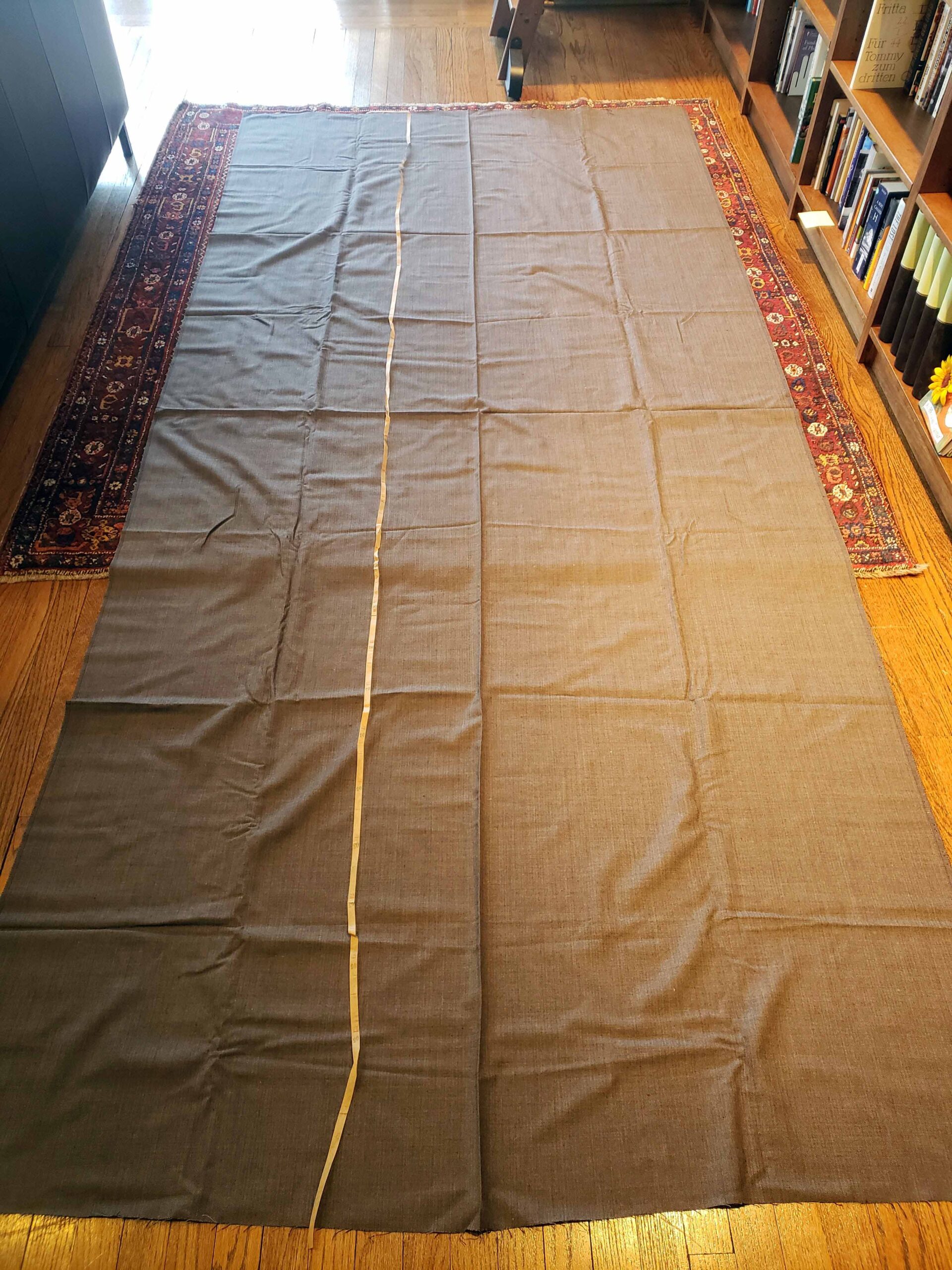 Today I spread out the herringbone fabric and got its dimensions.

I wonder if I could use it to upholster an armchair? We’ll see if it is enough fabric but I really would like to give it life beyond the trunk. What do you think?

As I unfolded the fabric, I noticed this wispy slip of pattern paper folded in along its entire length.

Clearly it was there as a measurement, see its markers in meters. This sent shivers down my spine. It must be original to Guido’s store!

How very moving to touch the past in this “measurable” way!

Note on process: It always amazes me that, when I look more closely, I continue to discover something new about a family object. And here I thought I already knew everything there was to know! I think that rather mindful aspect of writing about a family object, namely really examining it, and possibly researching its history, is part of what makes this such a meaningful pursuit. It creates a true sense of groundedness, even for someone like me who grew up between two countries.