The Power of Keeping a Promise to Yourself – Visiting the Greek Monasteries of Marsaba and St. George in the Judean Hills 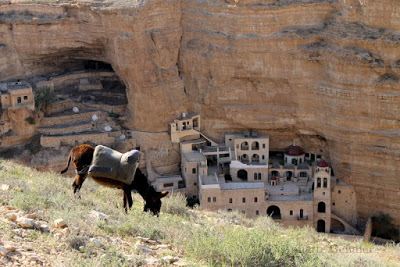 Always, always, I have wanted to see the Greek Orthodox monasteries of Marsaba and St. George, built into the cliffs of the Judean Hills.

But on all of my trips to Israel so far, it was either too hot (the desert wadis are not places to visit in the summer), or too dangerous (political unrest), or I was too busy with other things (seeing family and friends, learning Hebrew and seeing other sights) to actually attempt to see them.

On my most recent trip (I just returned a few days ago), I finally did it. I did something I always said, mainly to myself, that I wanted to do.

I found a jeep tour that would pick us up at our Jerusalem hotel and drive us out into the West Bank to see the monasteries. I texted my daughter whether we should do it on that one day when it looked like it could work out, she texted back, “Let’s do it!”

So we did it. Mind you, traveling out there is not without its hazards, see sign above, so you absolutely need a guide who knows his way around. In addition, the monasteries are remote, isolated, as the monks want to live as undisturbed as possible. They have left the world behind and have run these desert monasteries for hundreds of years.

Once we leave Jerusalem and are off-roading, we stop by an 800-year-old cistern (it can supply the Bedouin family that lives close to it with water for up to three years), pet a new-born lamb, and spot Israel’s national bird, the hoopoe, on a Bedouin grave.

Not until we reach the edge of the Kidron Valley does the magical castle of the Marsaba Monastery, clinging to the cliff on the opposite side, appear in the car window.

Founded in the 5th century CE, the Marsaba Monastery has been in continuous use and twenty monks live there these days. Inadvertently, I caught one of them in the above photo, on the stairs under the copper dome.

Women are not allowed inside the monasteries, so we are only able to view Marsaba from the opposite cliff.

It is a wonderous castle, isn’t it? Fortified by the crusaders in the 11th/12th century, it boasts the architecture of their sturdy fortress walls and towers.

Then it is time for mint tea and cookies, prepared by our guide in the back of his SUV.

On our way across the Judean hills, traffic jams West Bank-style.

My first glimpse of the St. George Monastery, built into the cliffs of Wadi Qelt, on the way from Jerusalem to Jericho.

St. George is not as remote as Marsaba, so here we tourists are met by souvenir sellers.

On the hill tops above, crosses stake the monastery’s claim to its territory.

Founded in 480 CE, St. George was destroyed by the Persians in 614 CE, and not really restored until the late 19th century. You can see that its architecture is quite different from that of Marsaba.

Before we leave, we visit the remnants of an aqueduct built by King Herod (73-4 BCE) in Wadi Qelt. The Dead Sea shimmers beyond the Judean Hills, their northern slopes dusted green with the grass of spring.
As we leave the wonders of the wadis behind us and drive back to Jerusalem, I sit in the back of the SUV and smile to myself. I am tired, sweaty and dusty but I also feel like I’m flying, floating on the inside. Why does it feel so great to have seen the monasteries? Sure, they are indeed magnificent sites to see, and I am happy that I finally managed to see them. But more than that, I realize, by having made this trip, I have kept a promise to myself, and there is special power in that.Keeping a promise to yourself boosts your confidence in yourself (your self confidence) because you actually do what you tell yourself you will do, not only for others but for yourself. And then, when you do it, when you fulfill that promise, you grow a little on the inside. You gain a little pride in yourself. You float.

Thanks for stopping by!