Sharing the Best Photos of our Once-in-a-Lifetime Trip to Petra, Jordan this Past January (Part 1: Jerash) 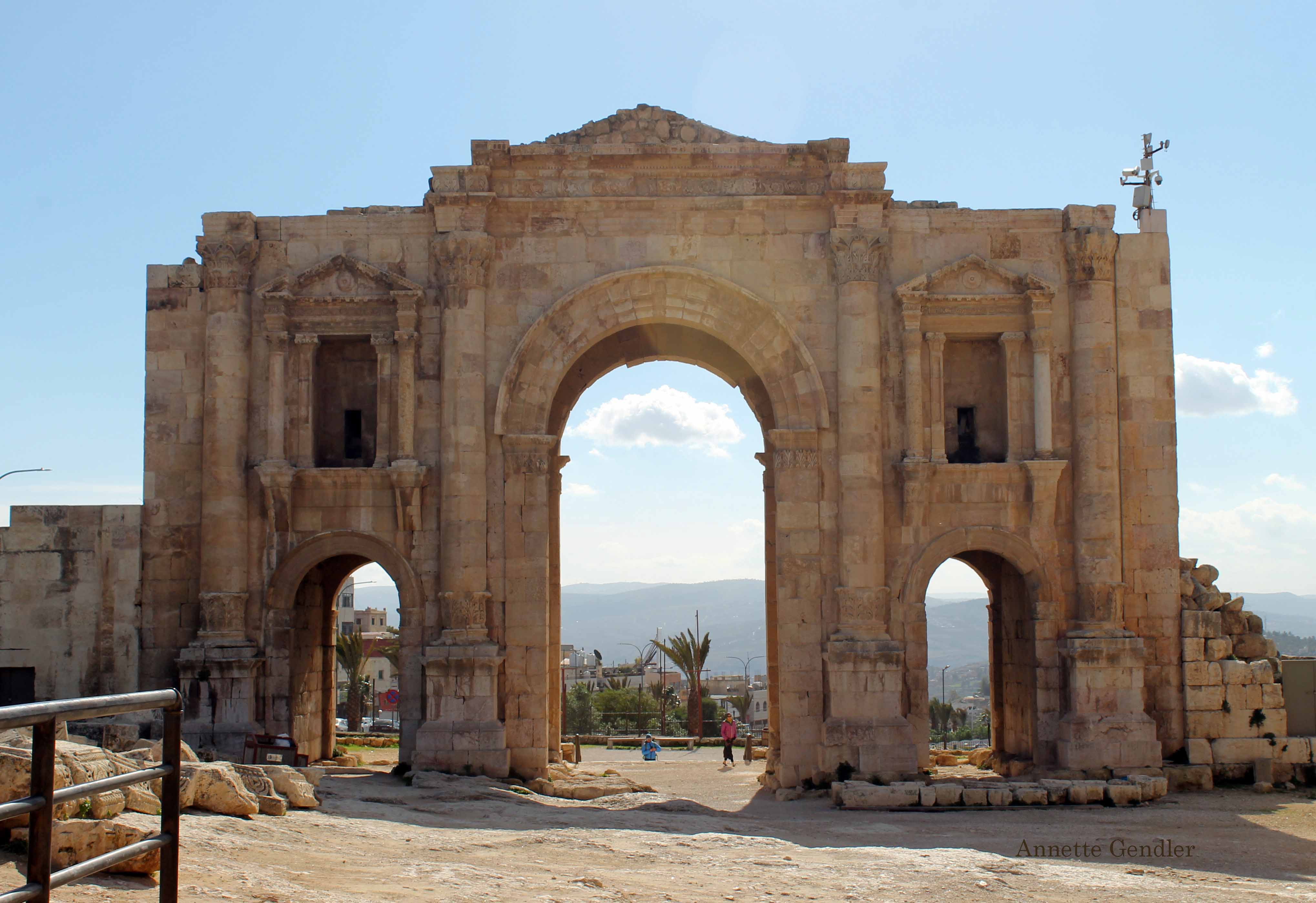 This past January I was fortunate enough to be able to cross one of the places I always wanted to see off my bucket list: Petra, Jordan.

Mind you, this didn’t come easy, and it wasn’t my first attempt. In December 2006, my mother-in-law and I booked a day trip to Petra from Eilat, Israel, only to be turned back at the border. Why? It had snowed in Petra! This happens rarely but alas, it did right when we wanted to visit.

Being snowed out of Petra was again a possibility when I planned this year’s attempt for early January.

As regular readers of my blog know, I travel to Israel quite often, but the season was never quite right before to make the side trip to Petra. It’s not a place I would want to visit in the summer when the desert heat is crippling. I wanted to be able to walk around a site like that!

It’s also a trip I wanted to make as a family and getting all five of us under one hat was another challenge, aside from the fact that I really had to persuade my husband into going. Anyway, I finally found two days on our recent trip to Israel when we all could go and the tour company I had selected had a two-day trip available. 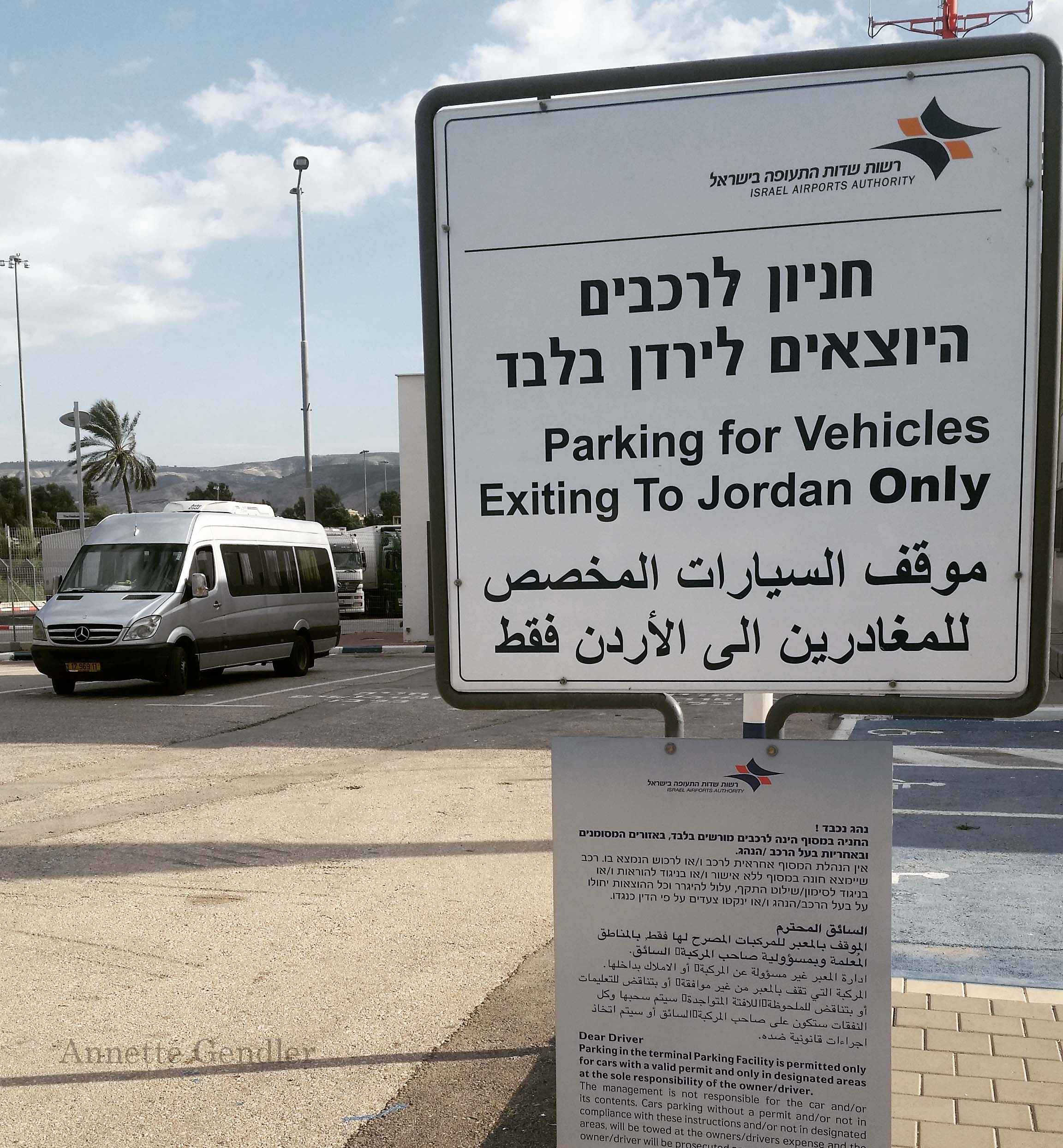 So off we went, rising early to catch the bus from downtown Jerusalem that took us to the Jordan River Border Crossing close to Beit She’an, Israel.

There we met our travel guide Rania. I was surprised that we had a female guide, and rightfully so. Later in the trip, my husband had a long conversation with her. He found out that of more than 1,000 accredited tour guides in Jordan, only 40 are women, and she was one of 14 who actually work as one.

Indeed, my impression was that Jordan is a very male country.

We saw few women out and about in any of the cities we visited: Jerash, Amman and Petra. In the restaurants, in the hotel, at all tourist sites, we encountered only men. The only other women I met were the toilet attendants. Having toilet attendants didn’t, by the way, mean that the toilets were clean or in good shape. Some were, some weren’t. The best restrooms we happened upon were unattended at a desert rest stop where Rania didn’t even want to stop! That’s a side note, but we all have to deal with restrooms, don’t we?

At the border crossing we also met our tour bus (pictured above at a later stop in the desert on the way back from Petra). Given my hip surgery last summer and my general trouble sitting upright,

how I was going to sit in a tour bus for hours on end?

When I saw that bus and its narrow benches inside, I was really worried. But, I made it work, mainly by sitting on one side of my butt with my affected leg extended into the aisle. That meant my husband was squished beside me with his knees crammed against the bench in front of us.

But, what are travel inconveniences like this, when you’re finally going to see Petra? 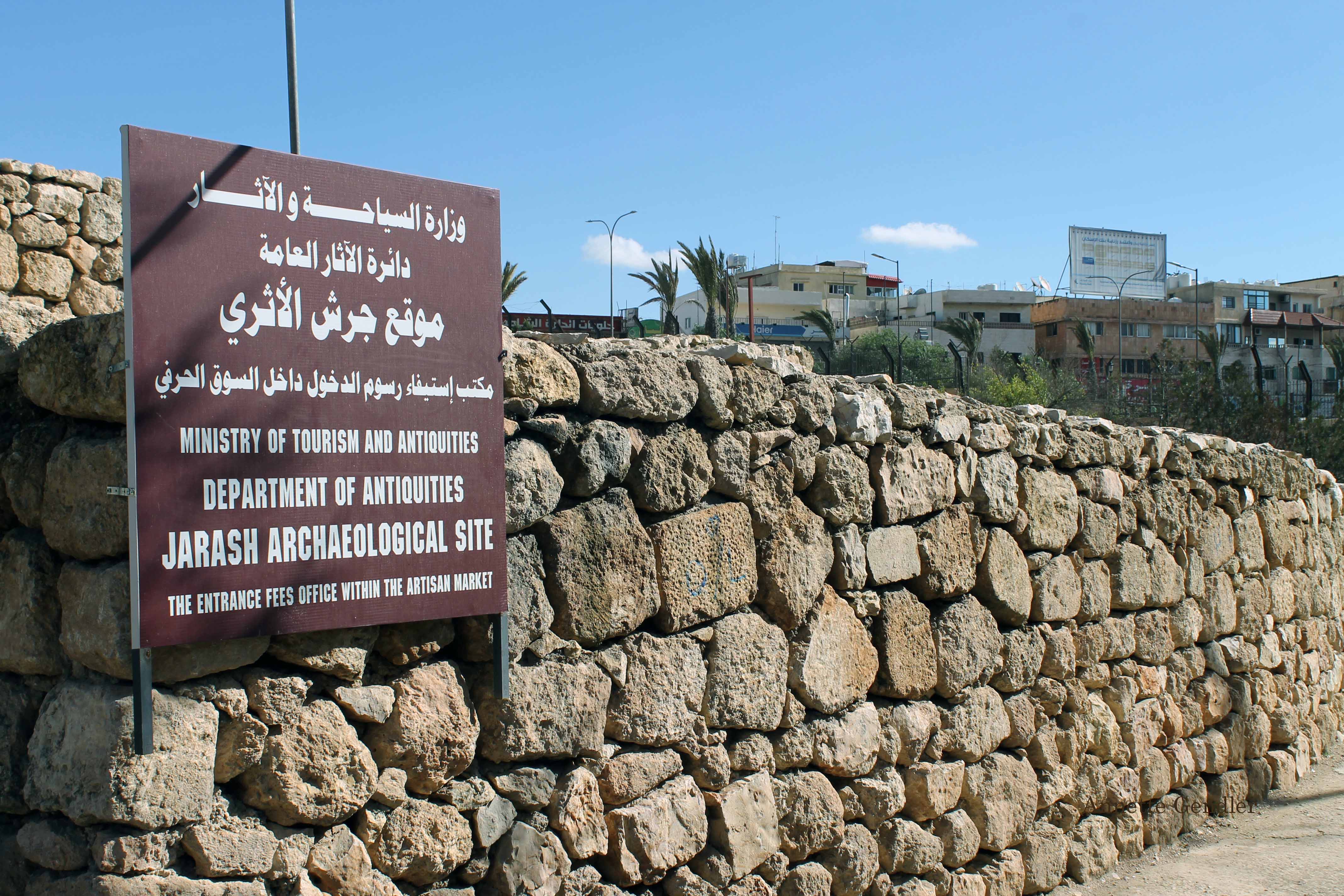 Our first destination, however, was the site of the Roman city of Jerash in the north of Jordan.

The archaeological site is located in the midst of a bustling Jordanian city.

For some reason, this photo of a garbage dumpster against the background of the city of Jerash is one of my favorite shots from this trip. Perhaps because it’s not a typical touristy one… 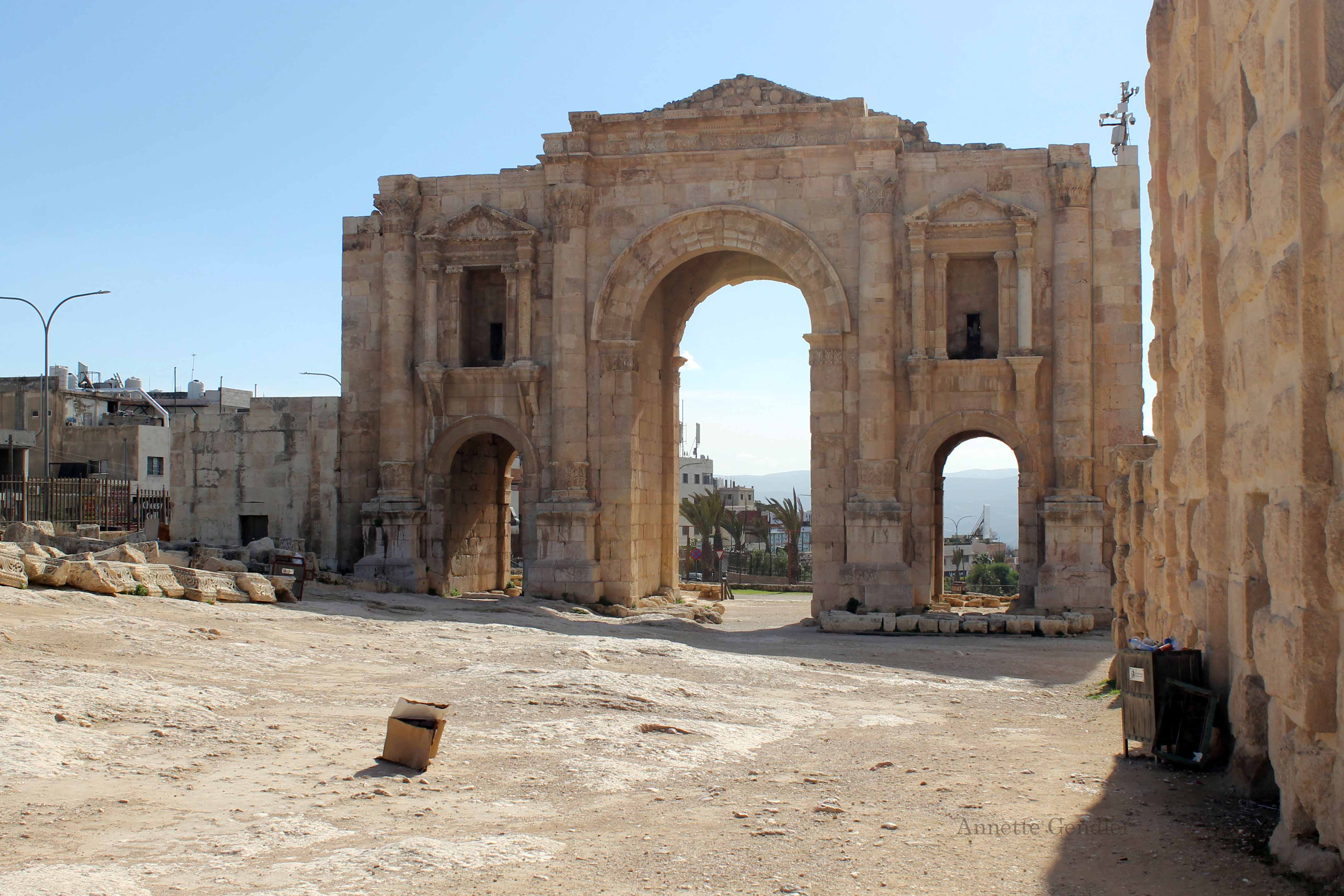 Hadrian’s Arch is the entrance to the Jerash Archaeological Park.

Jerash is a huge archaeological site, see above map. The entrance is on the left of this map and during the time we had, we only made it to the middle of this map where it says “Oval Plaza,” which is the Forum.

One of the walls of the Hippodrome (race course). It was rather windy and cold up there, as it was at every site we visited in Jordan. But, thankfully, no snow! 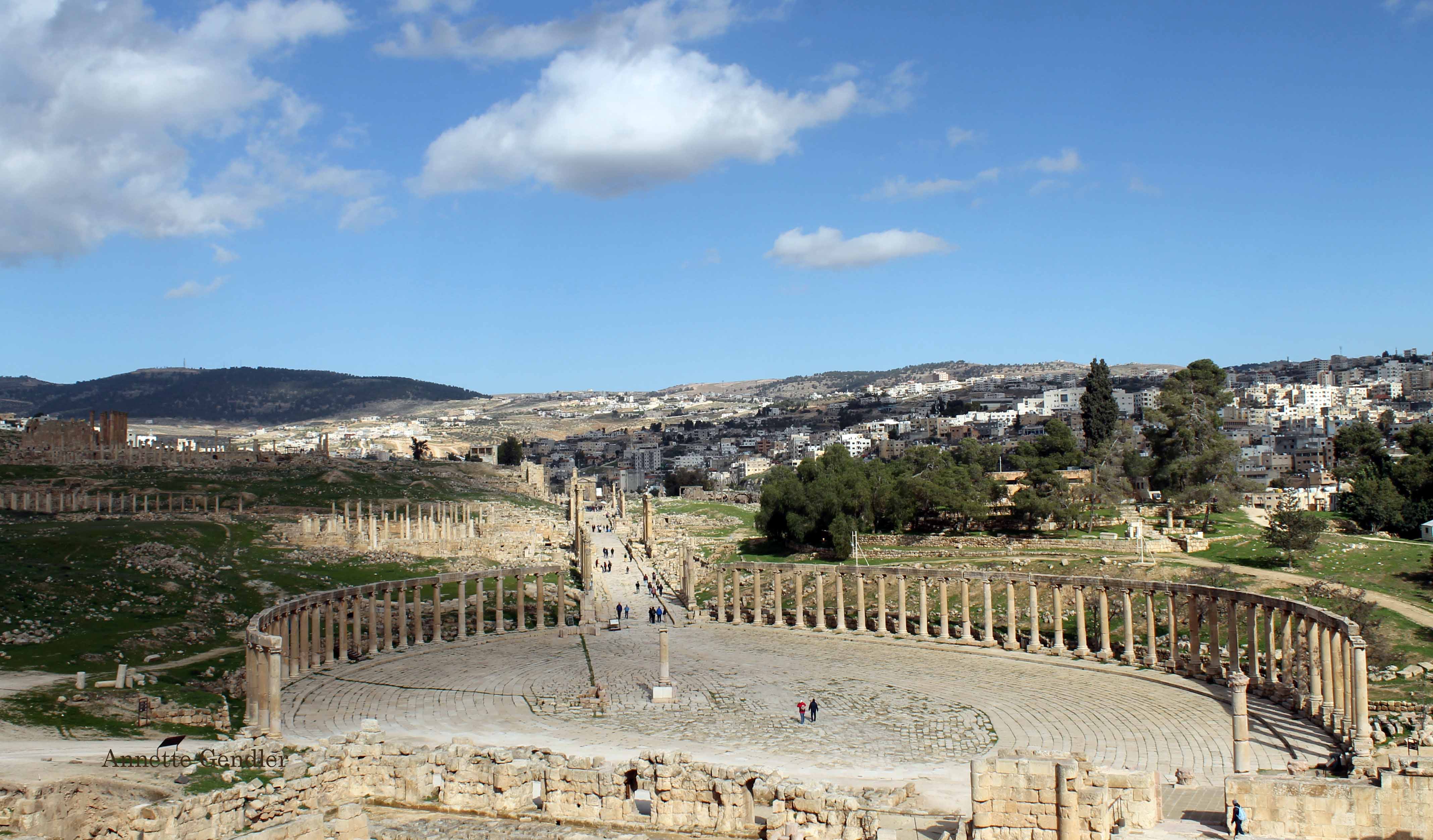 Here is a great view of the vastness of the site, taken from the ruins of the Temple of Zeus, which is up on a hill. The Oval Forum is in the front; from it the Cardo, the main street, basically, leads into the distance. 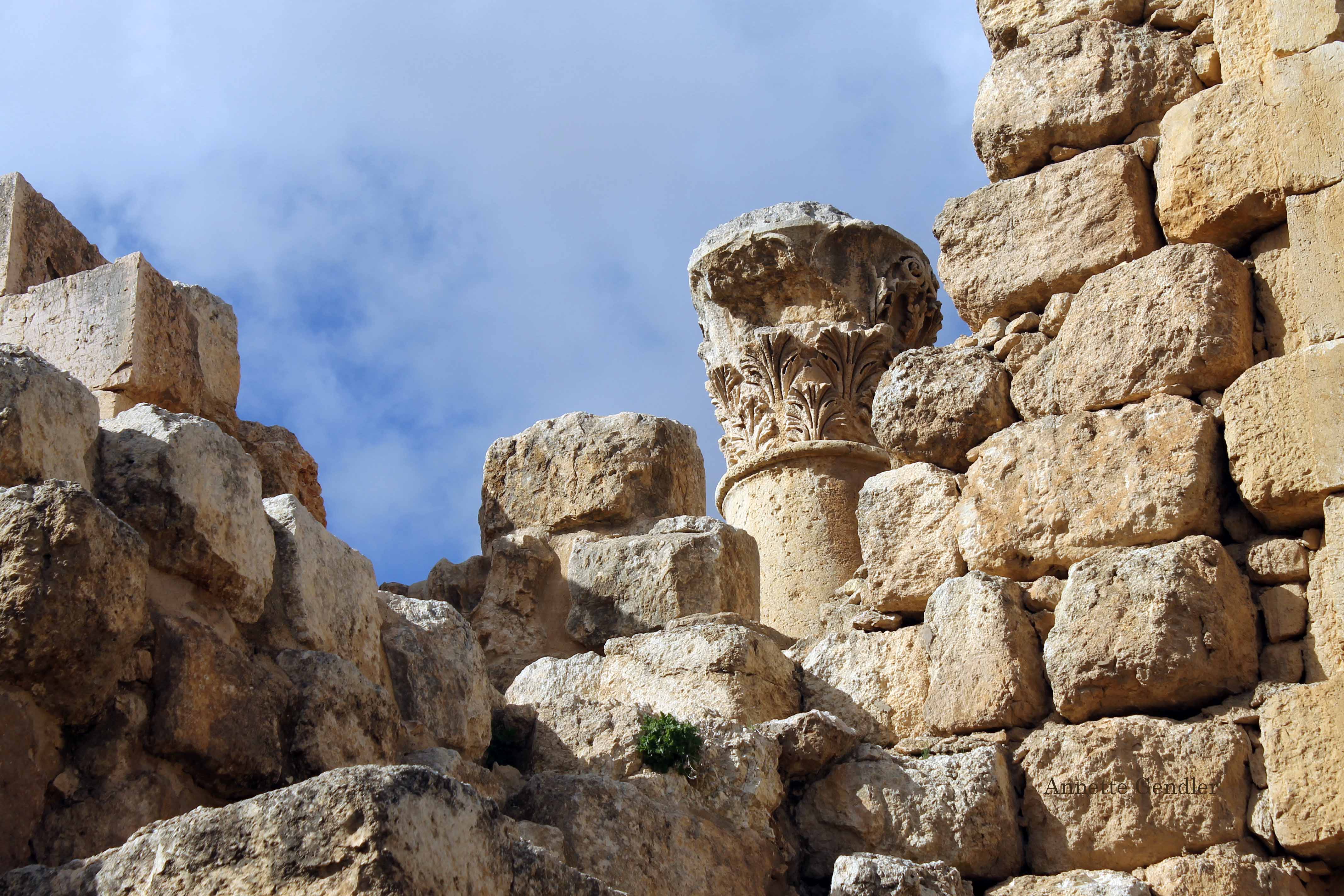 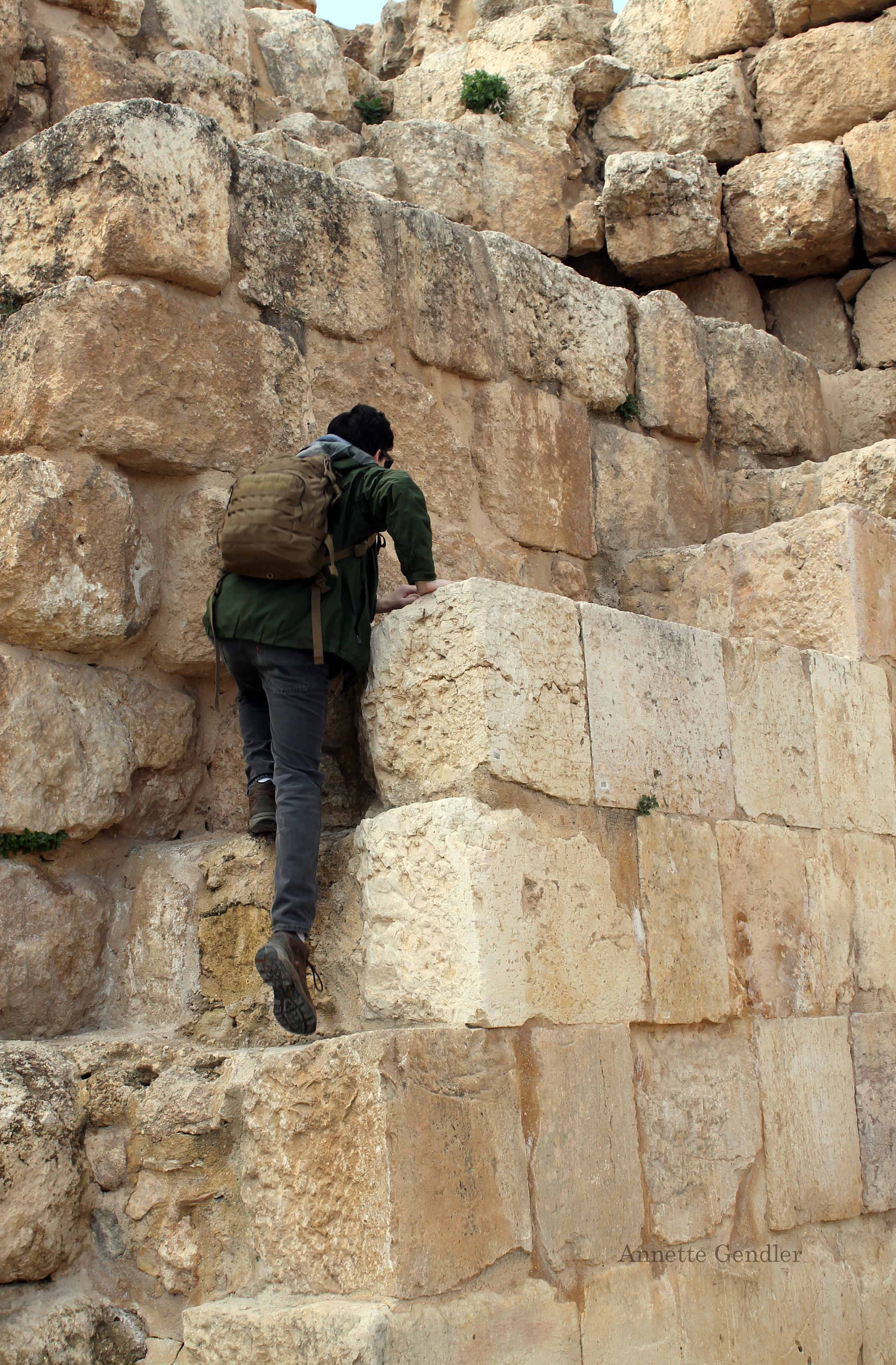 My son scales the Temple of Zeus ruins. 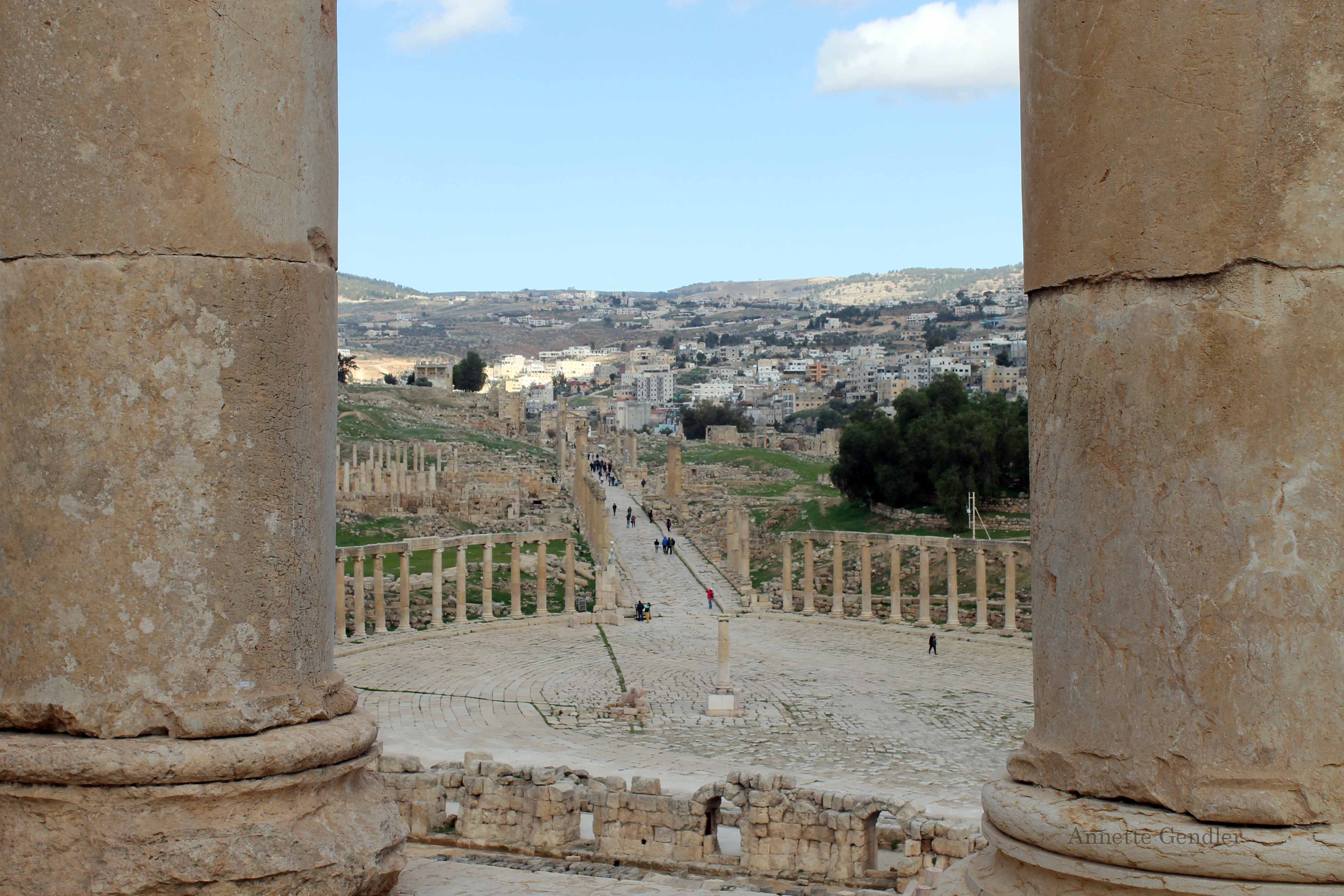 Another view from the Temple of Zeus. I love how you can see the whole layout of the former city! 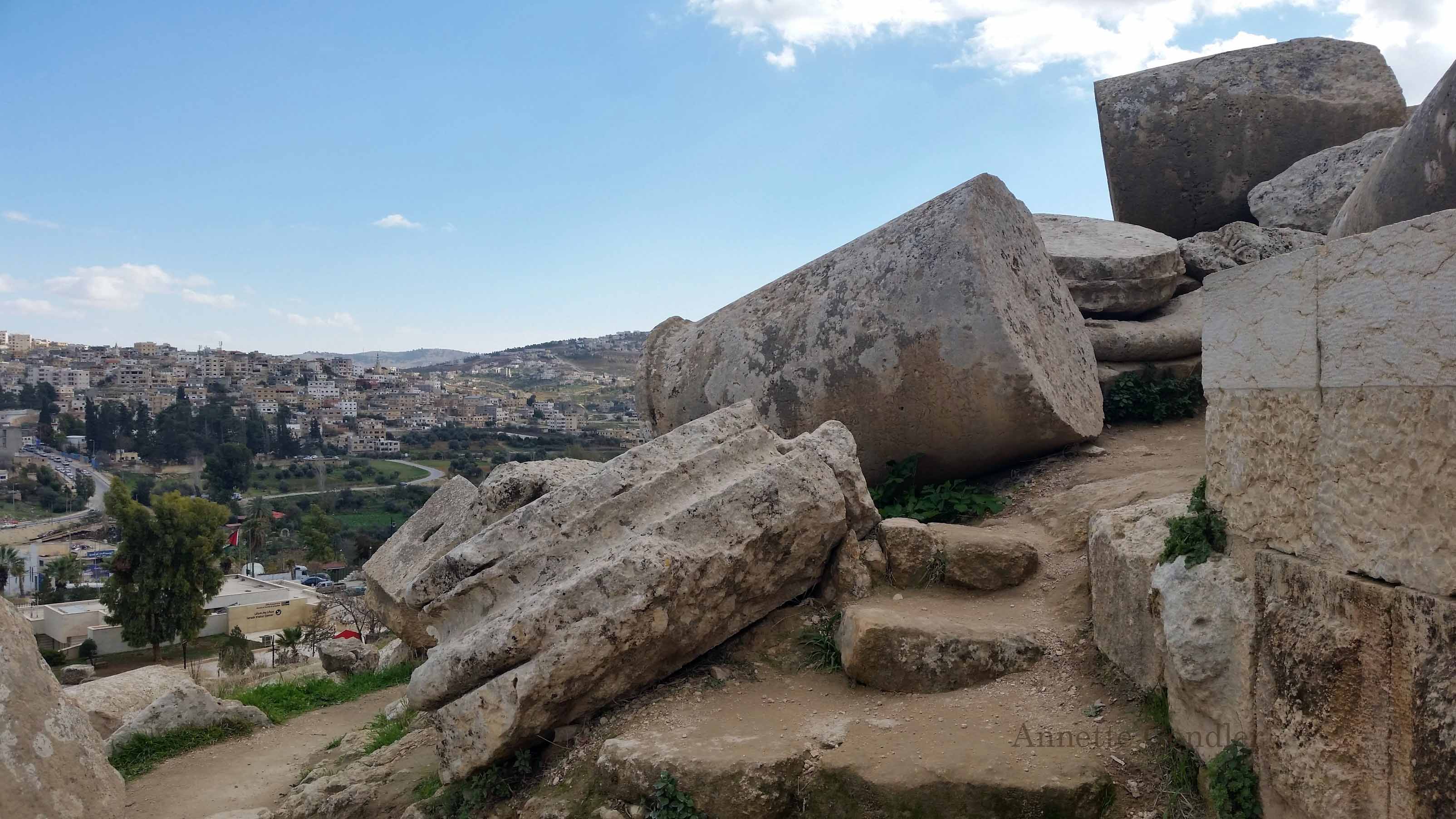 Just like its “sister” city Beit She’an in Israel, the Roman city of Jerash was destroyed by an earthquake in 749.

The toppled columns are still scattered about, just like they fell back then. 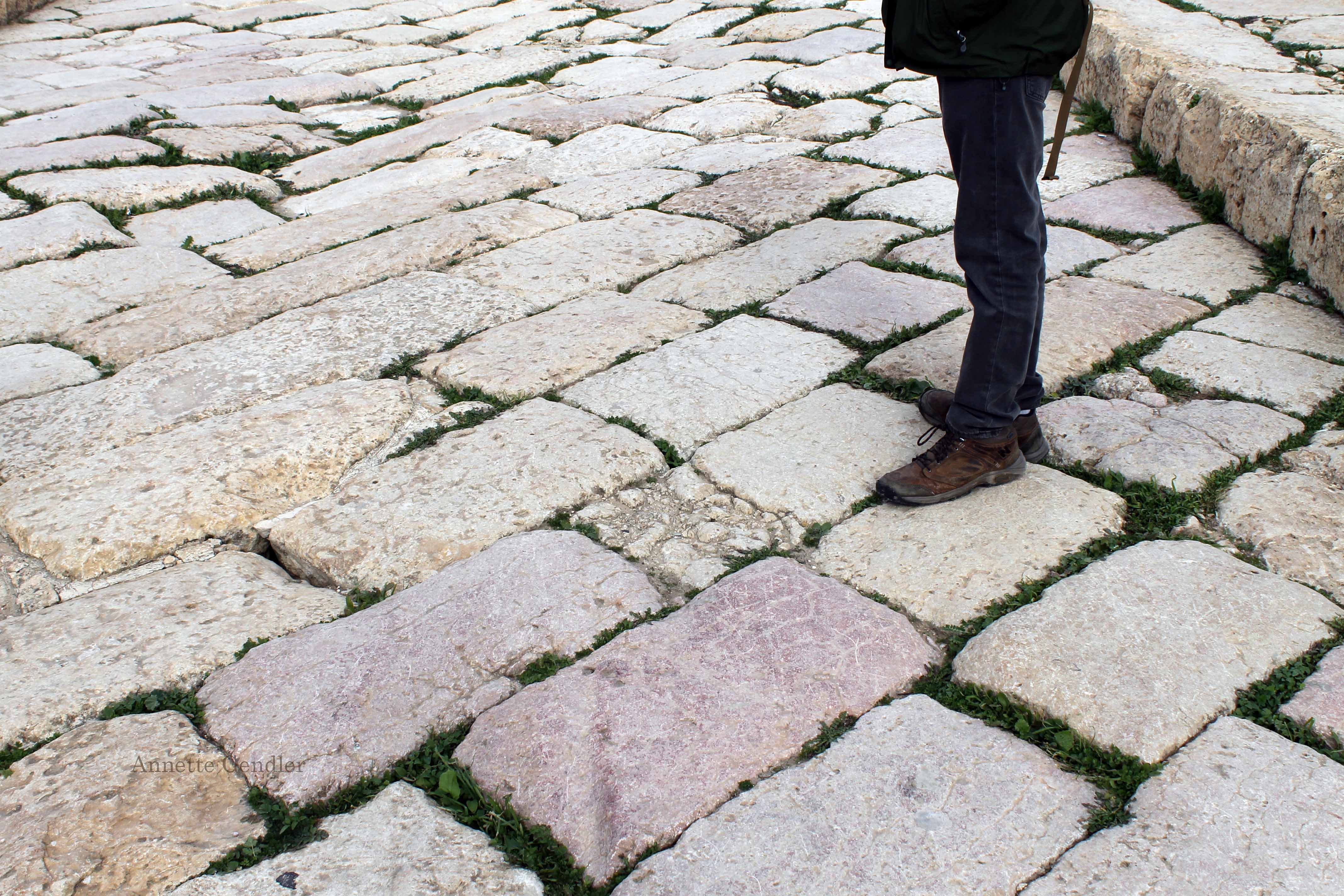 Similarly, the pavement of the Cardo is still wavy from the earthquake (and old age, of course). 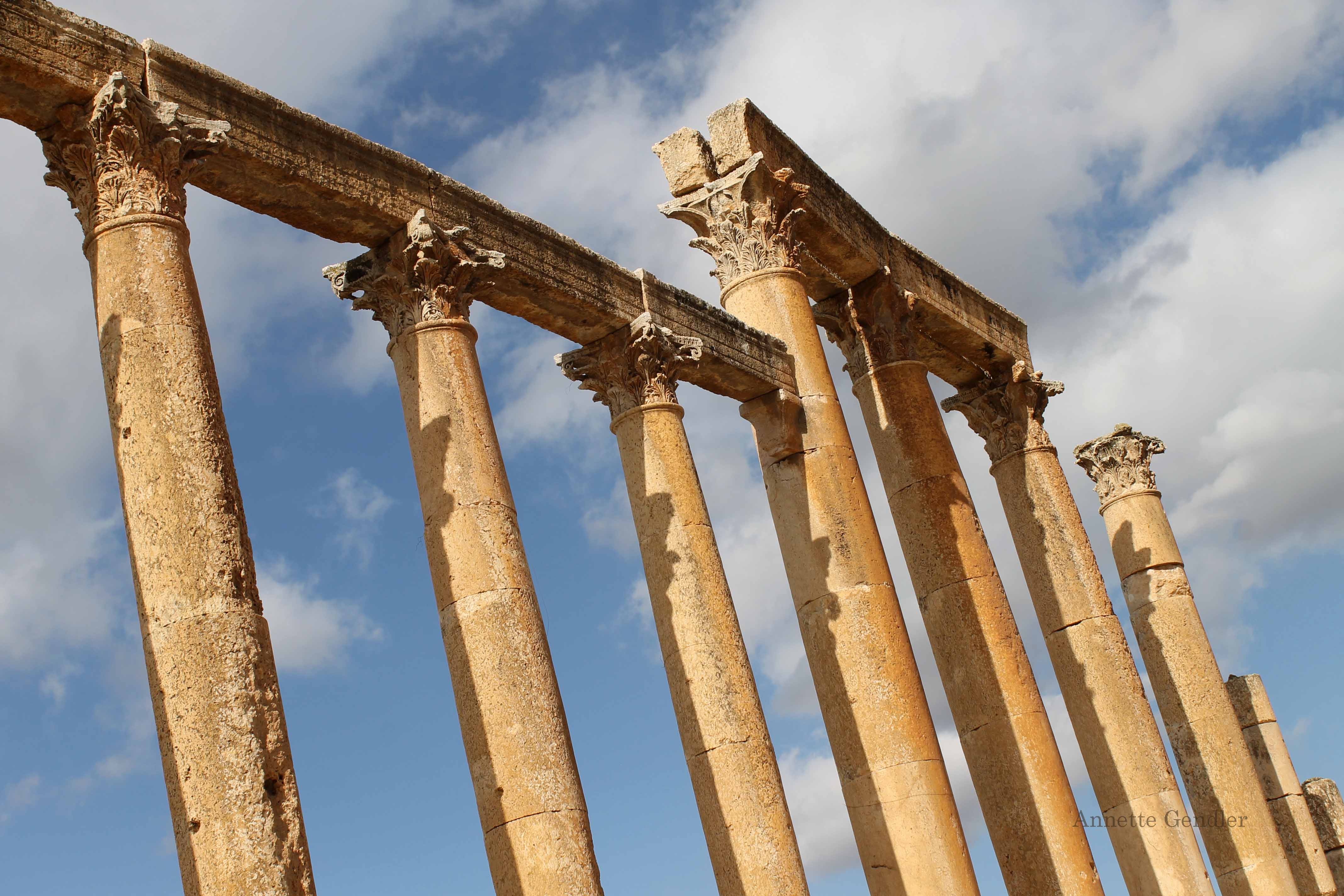 I loved the circular sweep of the pavement in the Forum. 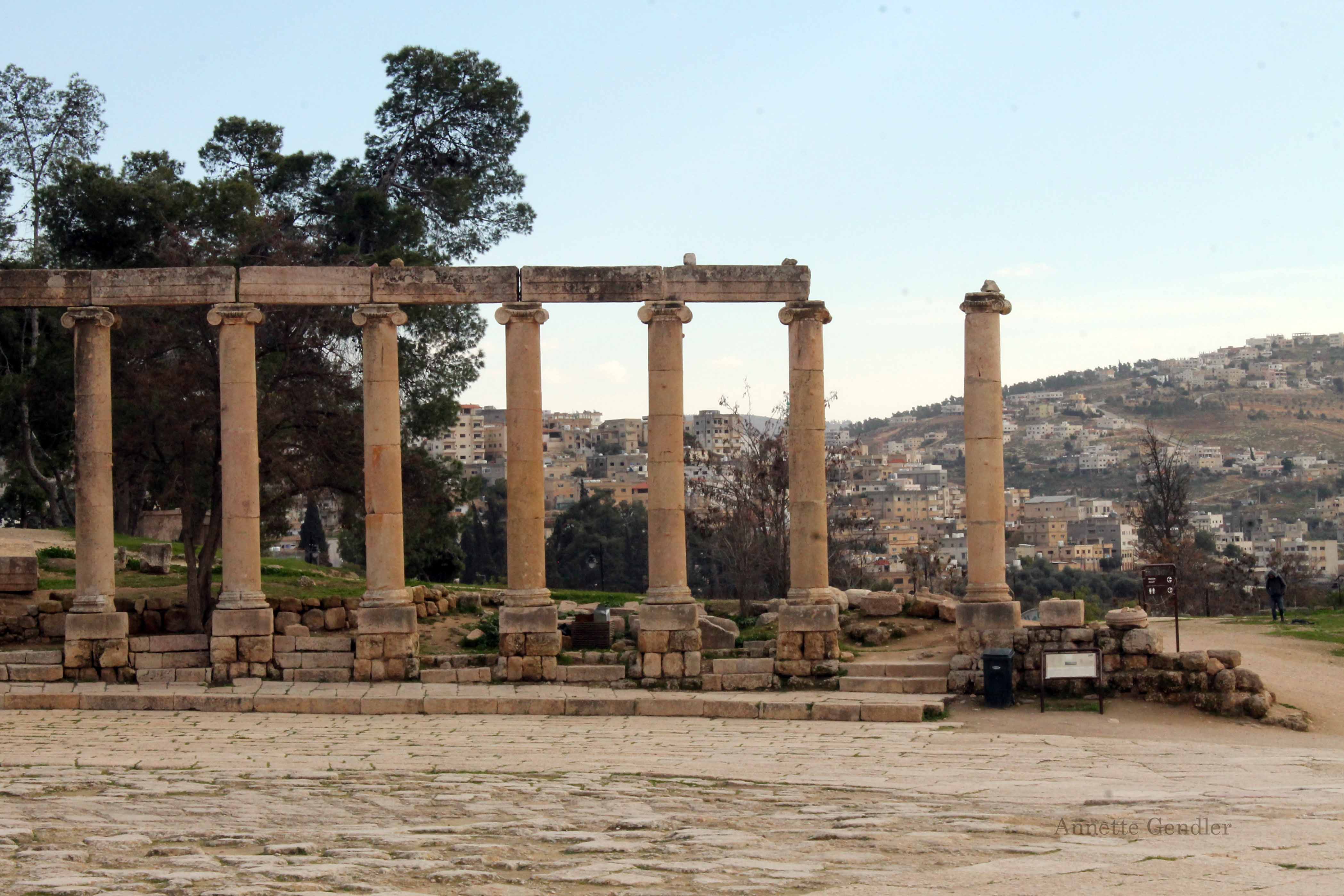 Such was our exploration of the windswept ruins of Jerash.

After a delicious lunch (the food was consistently great in Jordan but then again, I love Middle Eastern cuisine!), we traveled on along the winding roads to the modern-day bustle of Amman.

I will share my impressions of Amman in next week’s blog post, which will be Part 2 of this travelogue. See you then!