A Favorite Recipe for the Jewish Holiday of Purim: Chocolate-Poppy Seed-Filled Hamantashen 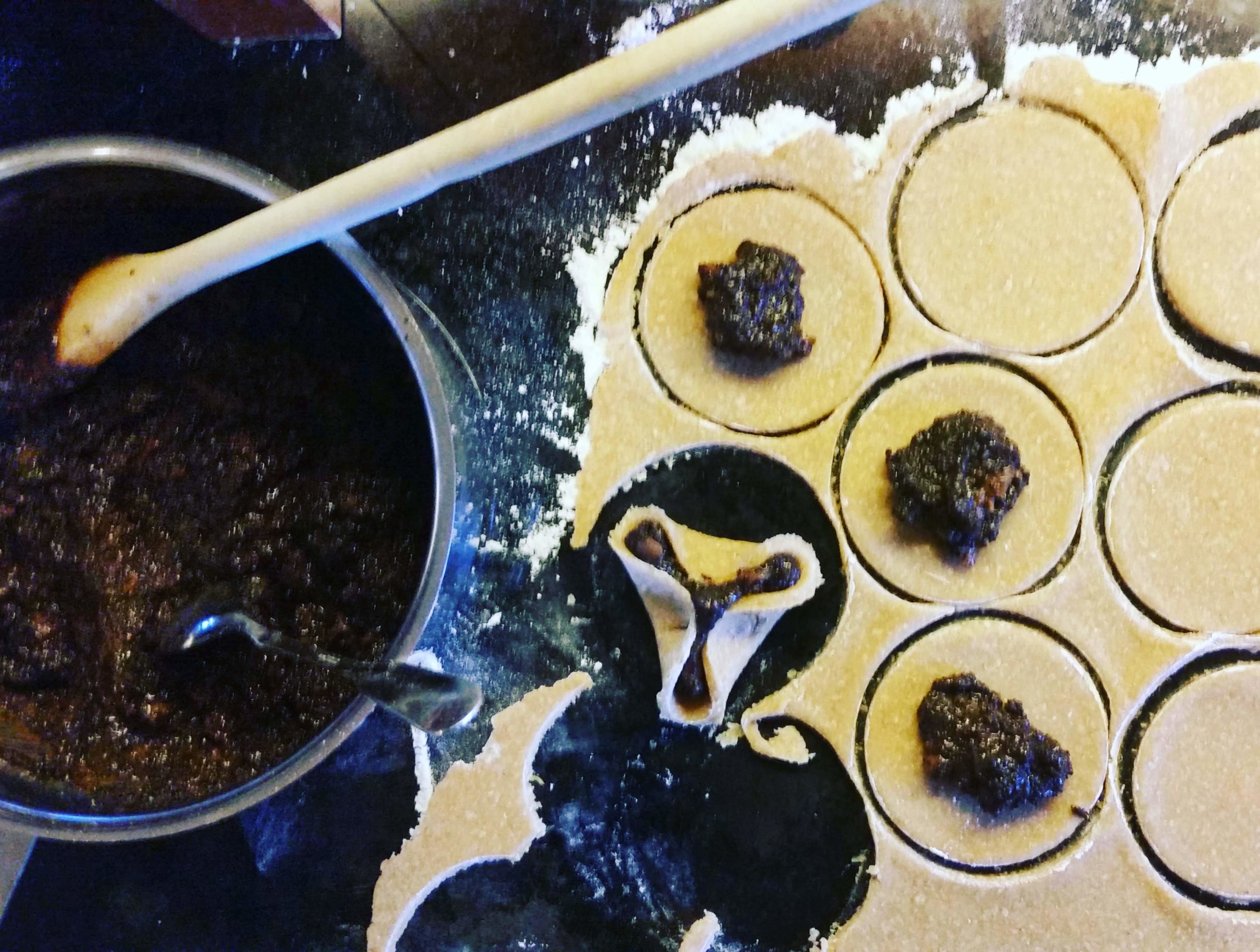 It’s the time of year again! The Jewish holiday of Purim is around the corner. I have shared why it took me a while to get into giving Mishloach Manot for Purim, a custom that first struck me as rather odd. How I got into that is captured in my Kveller article Why Jews Need This Silly Purim Tradition.

Baking Hamantashen, however, was not something I had a hard time getting into, mainly because I love the traditional poppy seed filling.

While my kids never liked eating poppy seeds (including sprinkled on challah!), they loved grinding them. 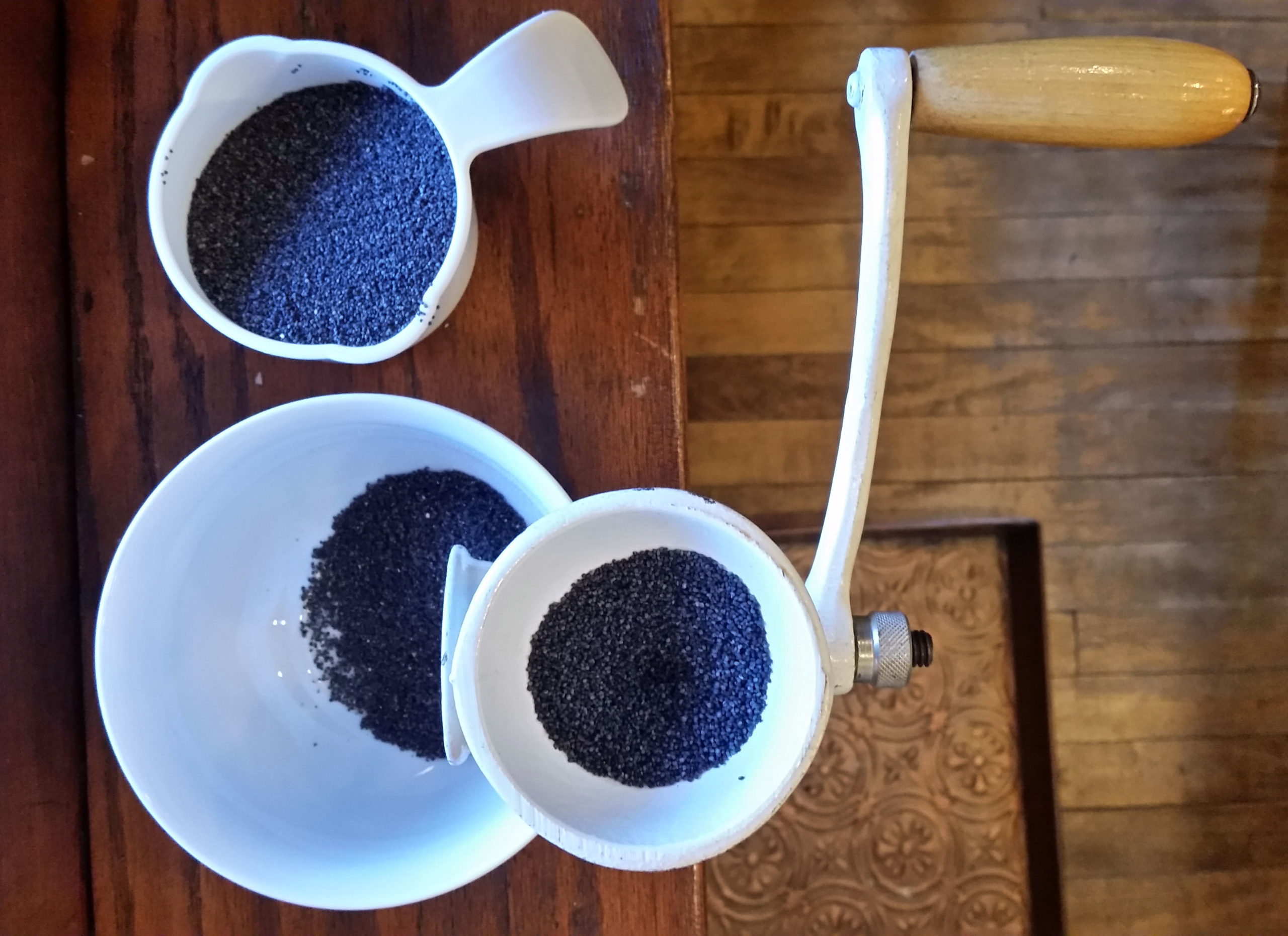 This is something even a three- or four-year-old can do. I use a poppy seed grinder, a tool I never realized was a gourmet chef item because I knew it from my grandmother’s kitchen. Coming from Bohemia, poppy seed was a staple in her baking.

Years ago, I was chatting with our school’s Hamantashen master baker and mentioned how the grinding was a bit of a chore. He had not heard that poppy seeds needed to be ground! He’d always wondered why his poppy seed filling turned out grainy.

So yes, for this to work properly, you must grind the poppy seeds! According to Leah Koenig, however, you can also use a coffee or spice grinder. Here’s the full recipe, including the dough for which I follow another recipe from another cookbook.

Use poppy seed grinder (or spice or coffee grinder) to grind the poppy seeds, working in batches. I always send a bit of matzo meal through the grinder before putting in the poppy seeds to clean it out as it hasn’t been used for a year.
In a small saucepan over medium heat, combine the milk, sugar, and ground poppy seeds. Bring to a simmer, then turn the heat down and cook, stirring often, until almost all the liquid is absorbed and the mixture thickens. About 10 minutes.
Add the orange juice, lemon juice and butter. Cook until absorbed, 2 to 3 minutes. Stir in the chocolate, lemon rind and vanilla extract, stirring continuously until the chocolate melts and the mixture is very thick, about 2 to 3 minutes more.
Remove from heat and let cool. You can even make the filling ahead of time and store it in the fridge.

Beat the eggs in a mixing bowl.
Gradually stir in the sugar until the mixture thickens and bubbles appear.
Mix in the oil, lemon juice, lemon rind and vanilla.
Add in the baking powder, and mixing continuously, add the flour. (Here I switch halfway through from using beaters to dough hooks on my electric mixer as the dough will stiffen.)
Gather dough with your hands, and add flour, if needed, until it isn’t sticky and forms a ball.

Preheat oven to 350 F/ 180 C.
On a floured surface, roll dough out to about 1/8″ (3 mm) thickness. I work in three batches. Cut out 3″ (7-8 cm) circles. (I simply invert an IKEA plastic cup that’s left over from my kids’ childhood, which is about 3 inches wide.)
Transfer the circles to a baking sheet lined with parchment paper. They can placed close to each other as they don’t expand while baking.
Put a teaspoon of filling on each circle, then fold up two sides first, giving a little squeeze, then fold up the third side.
Bake for about 15-20 minutes until they show only a slight touch of brown. (If you brown them too much, they come out too dry.)
Let cool on the sheet for 15 minutes, then on a wire rack.

If you have some dough left over after using all the poppy seed filling, fill the remaining Hamantashen with Nutella. My kids could have done with pure Nutella Hamantashen, meaning I could have spared myself the work, but for me, it isn’t Purim without poppy seed-filled Hamantashen.