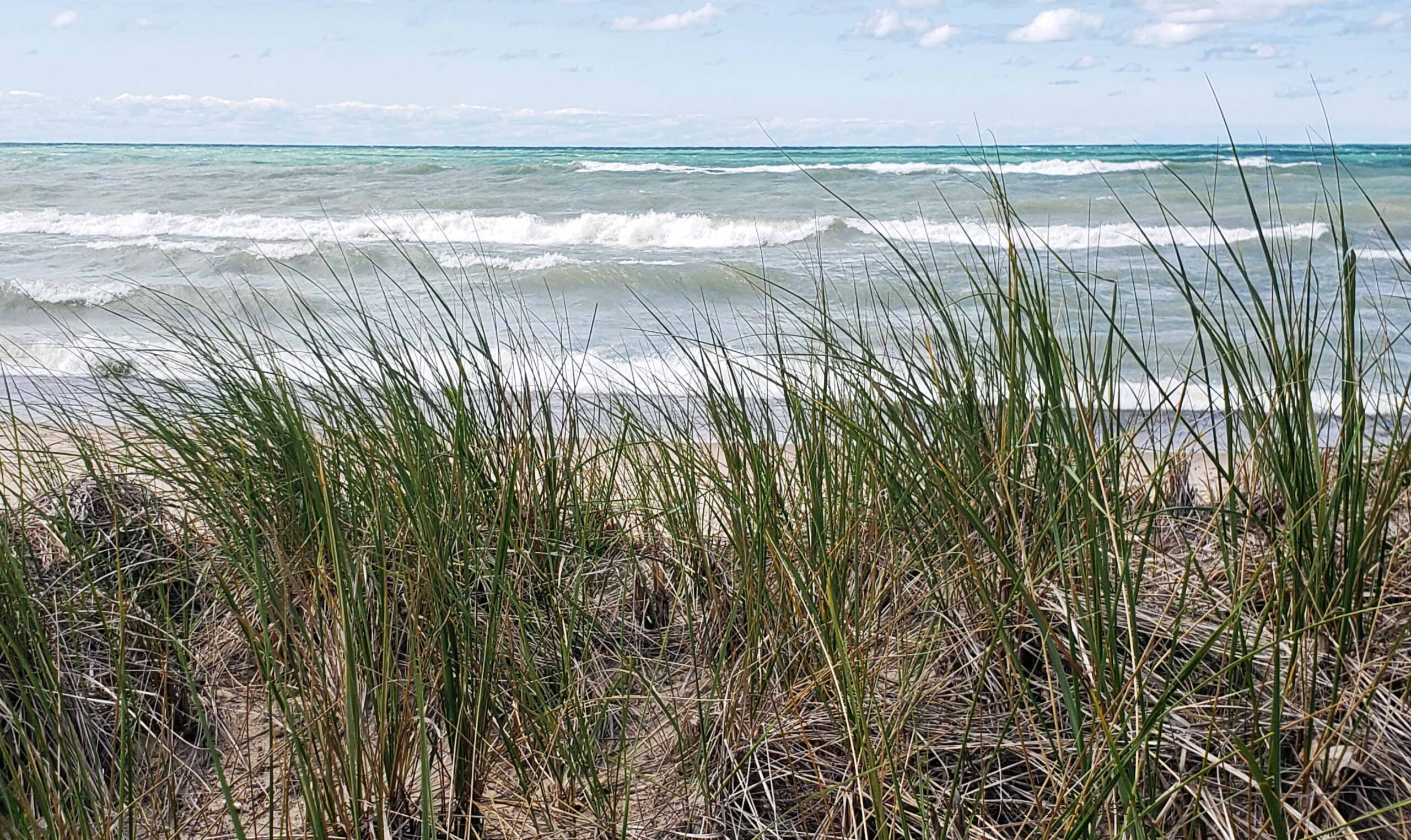 For weeks my daughter had been nudging that she wanted to go hike trail 10 in the Indiana Dunes.

She wanted to relive a childhood experience. We had taken the kids on the woods part of that trail way back when. It is fairly flat and thus easier to manage for little legs. But we had never gone in the summer when the woods can be stifling and full of mosquitoes. 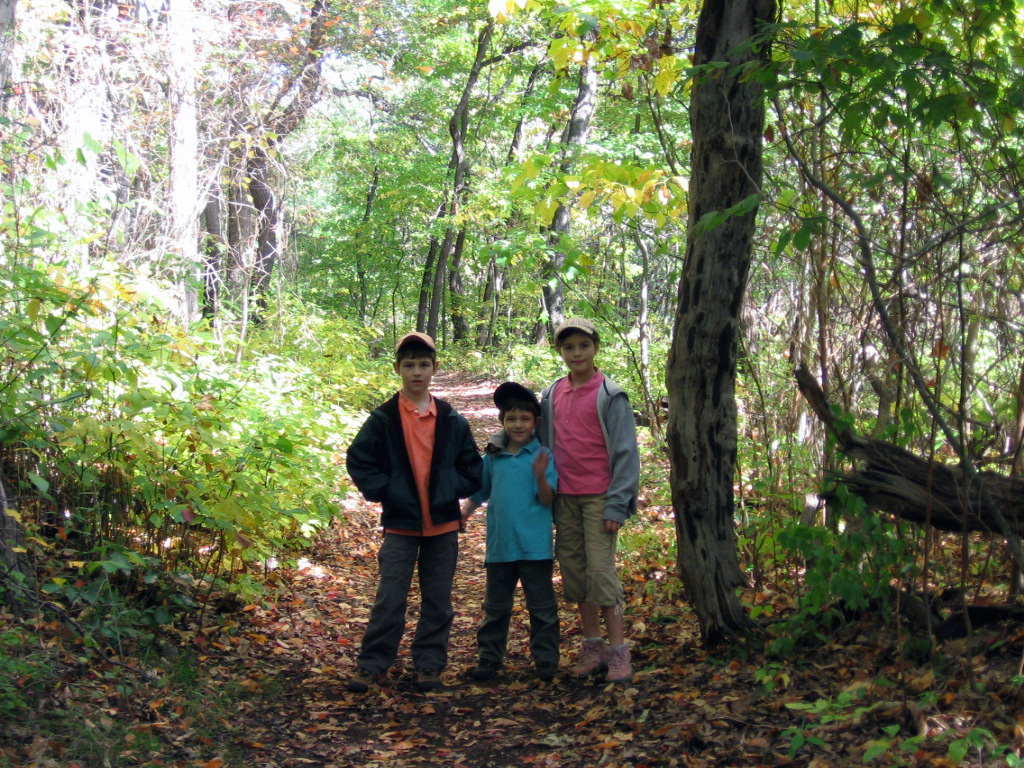 I was reluctant: At 5.5 miles, trail 10 is the longest in the Indiana Dunes State Park. Half of it is along the sheer endless beach. Slugging through sand in the blazing sun is not my idea of fun.

Nevertheless, I gave in this week. And I am glad I did.

We hit on the perfect weather, namely barely 70° F (21° C), with a breeze and lots of clouds in the sky. We went mid week when the park is not crowded. Meaning, you can find parking. Hiking trails, truth be told, tend not to be crowded, no matter when. 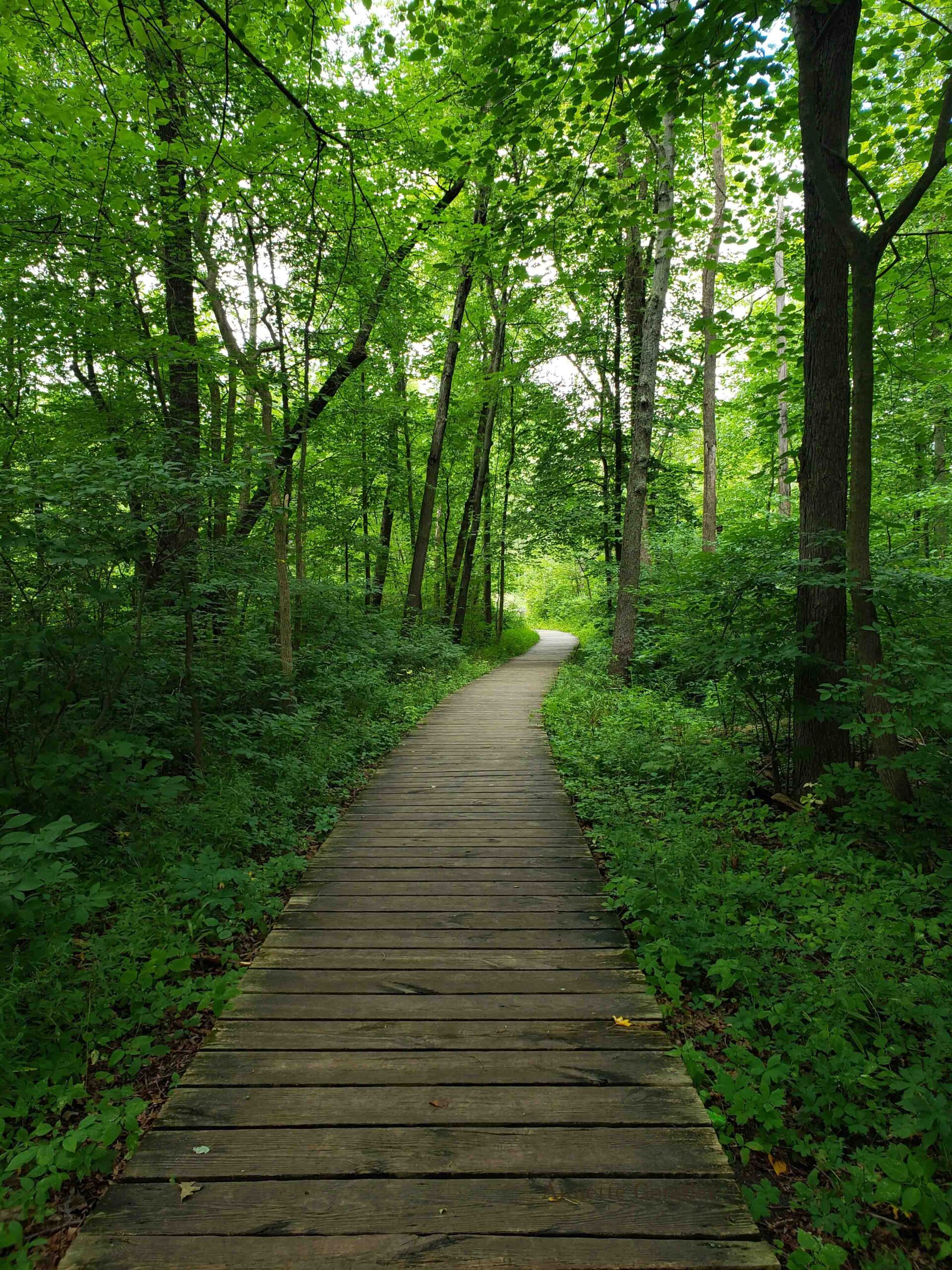 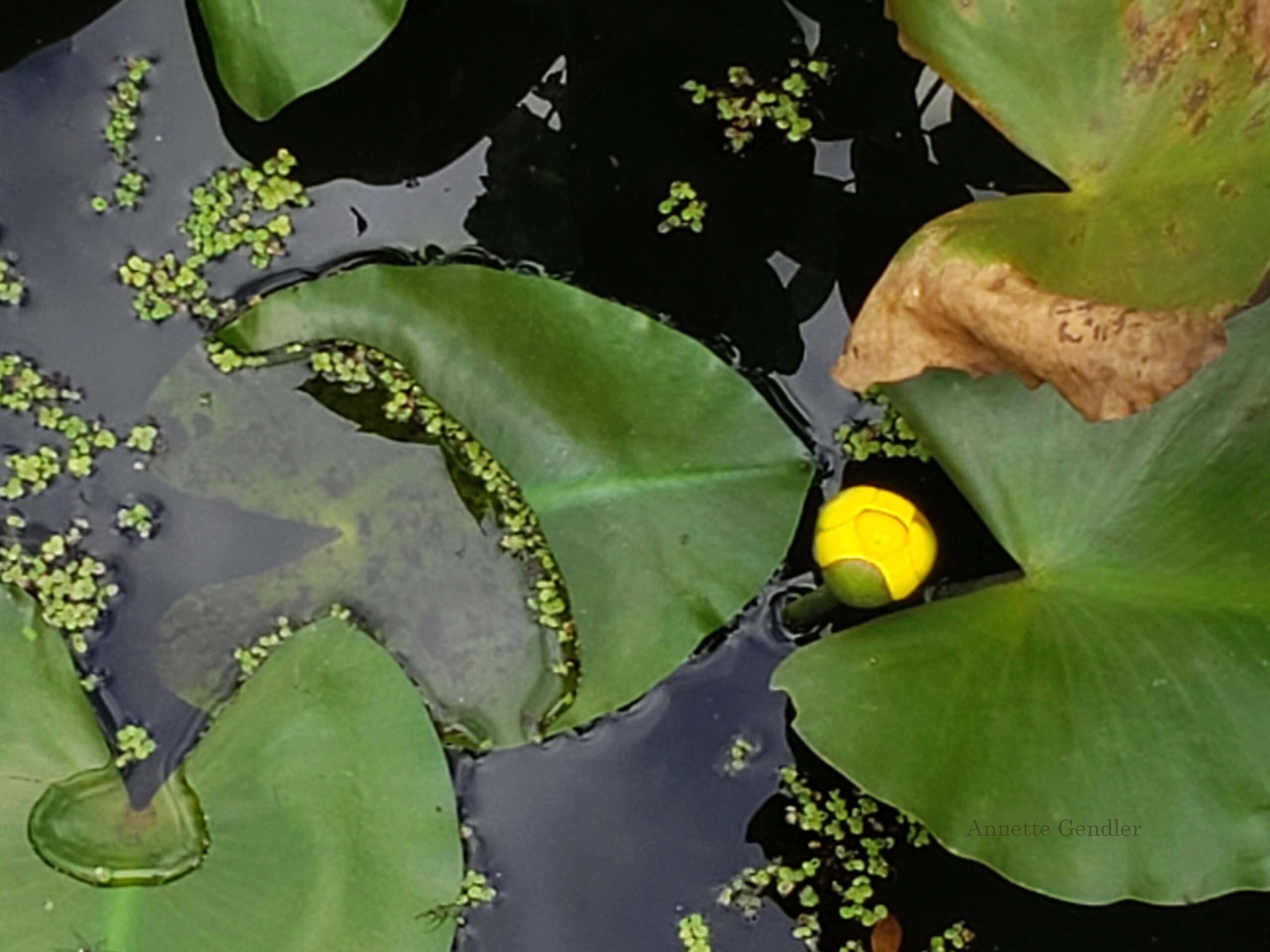 The beginning of the trail passes by the Great Marsh, where the water lilies were about to bloom. Water lilies always remind me of our trip to the Brazilian Amazon where we saw giant water lilies.

By the way, the Great Marsh is actually misnamed.

Do you know the difference between a marsh and a swamp?

I keep forgetting even though my daughter always knows the difference, as this bleached-out plaque informed us:

The Great Marsh is actually a swamp because trees do grow in it. But no matter. 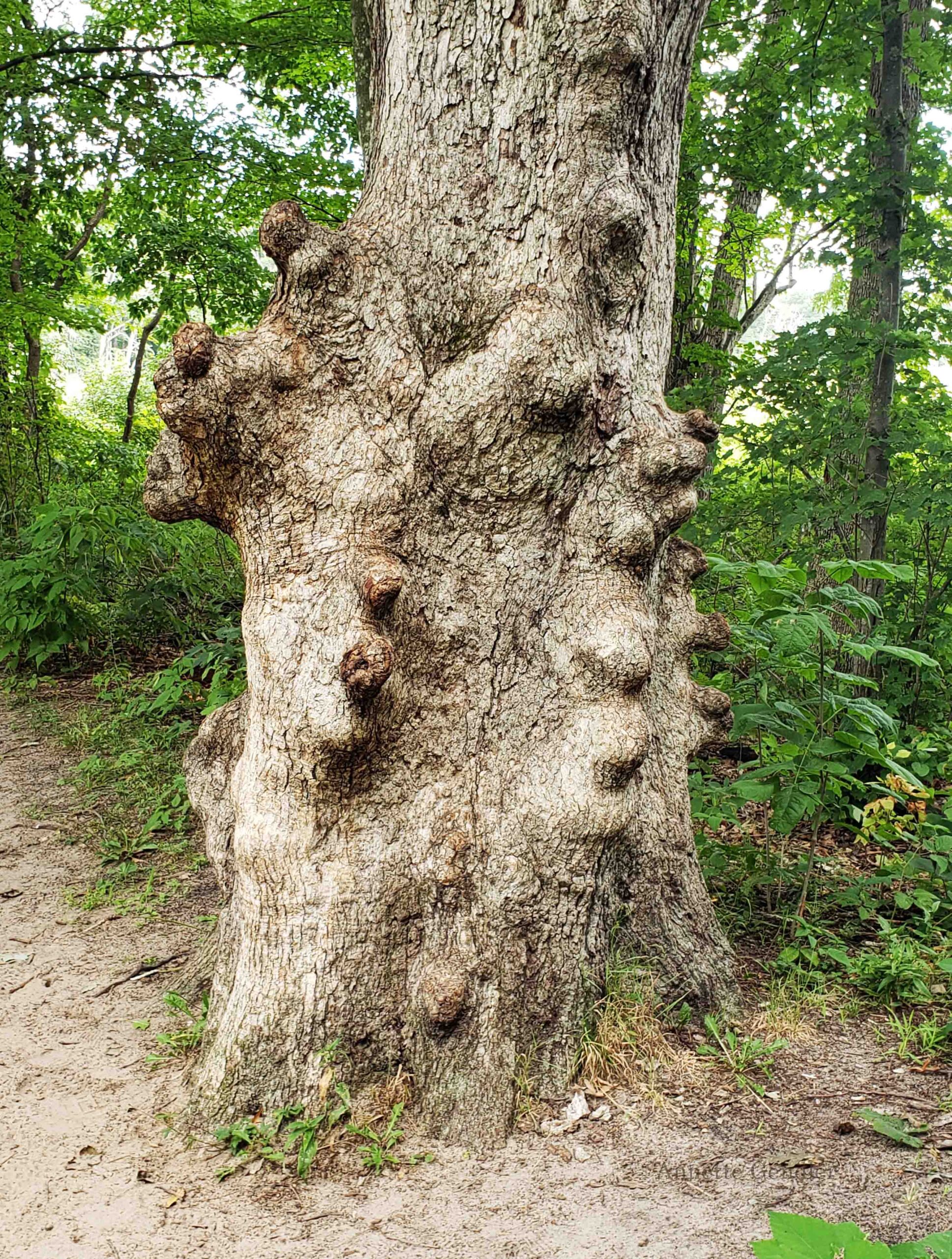 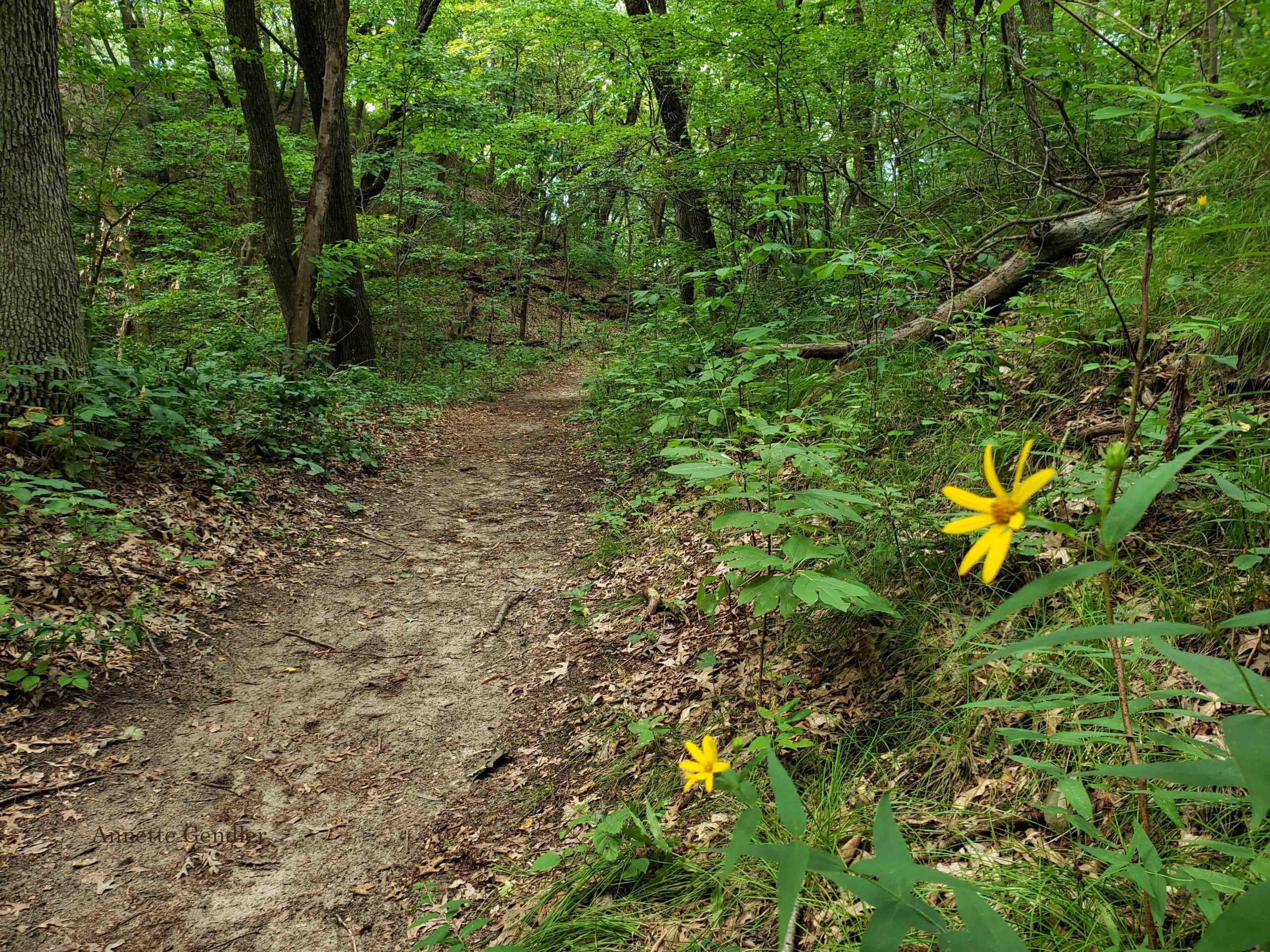 We marched on through the woods, past gnarly trees and occasional wildflowers. Not one mosquito bothered us.

After about 1 1/2 hours and going up a slight incline, we made it to the turnaround point of trail 10: First we heard the thunder of the waves.

And then the horizon opened up, and there it was: Lake Michigan and the beach! 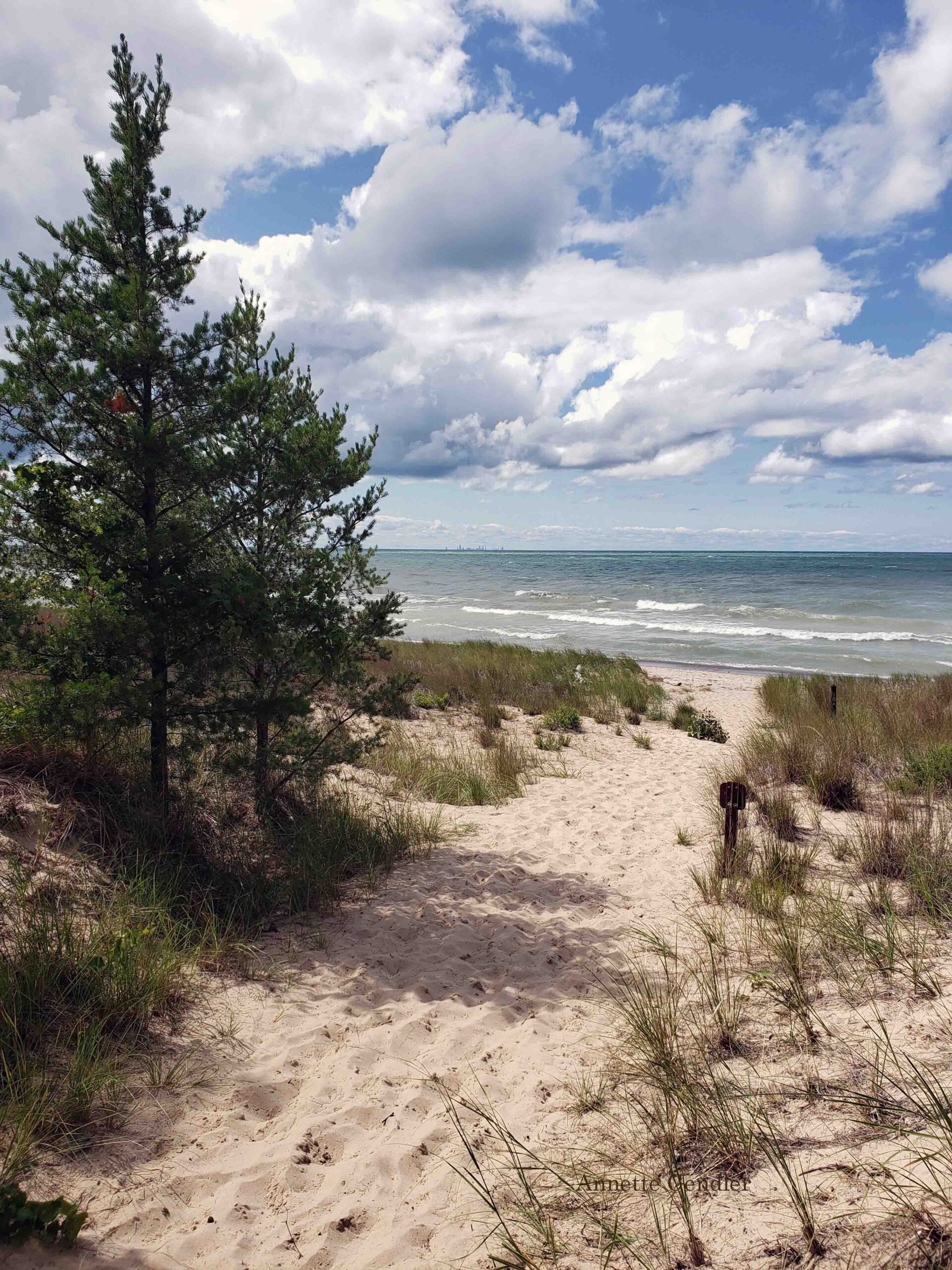 Here’s my younger son at this very spot in 2005. I love finding photographic proof that this was indeed a return trip. 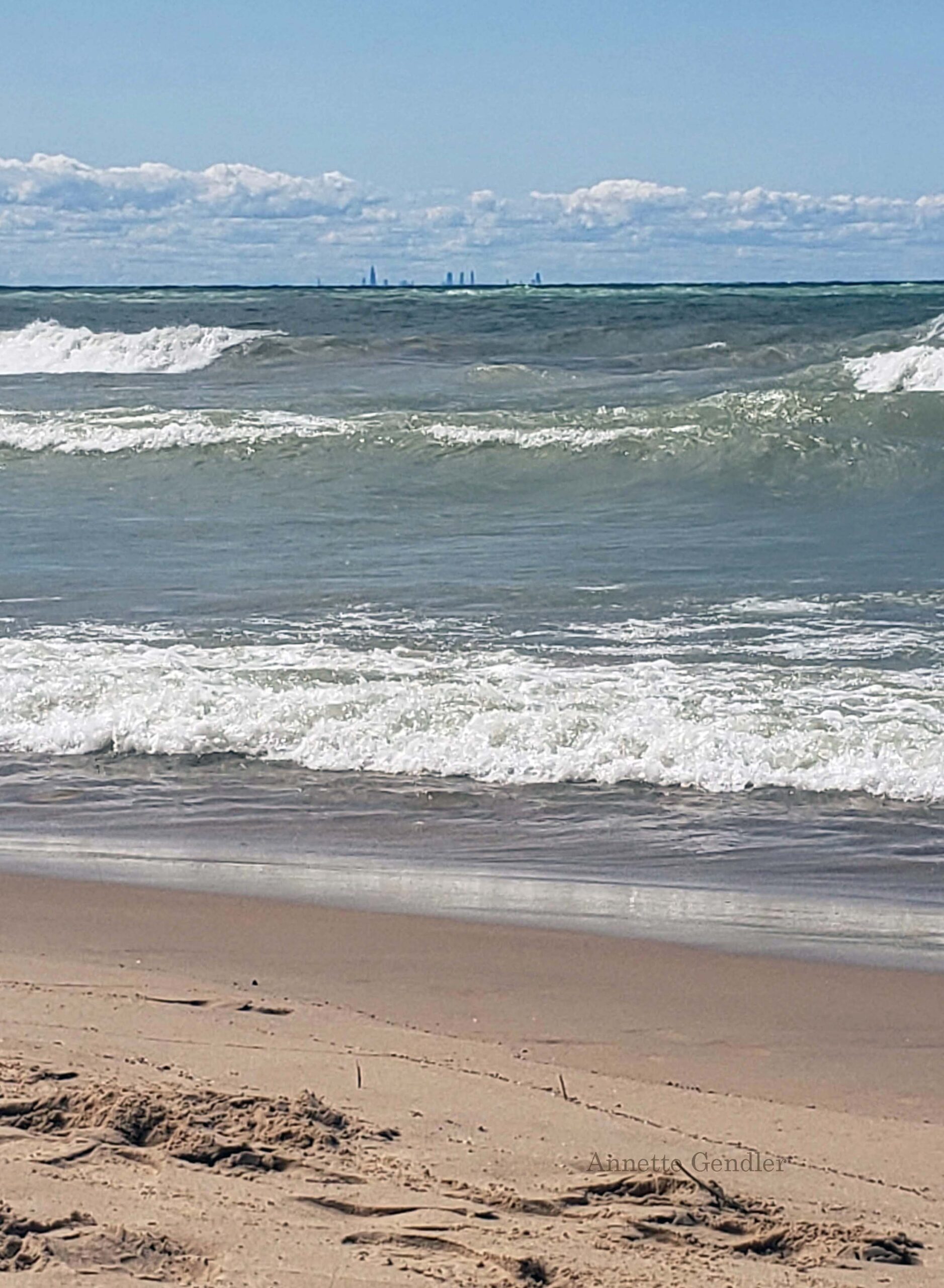 It was such a clear day that the skyline of Chicago was sharp on the horizon.

I always love seeing the grand skyscrapers appear like tiny spikes from so far way. 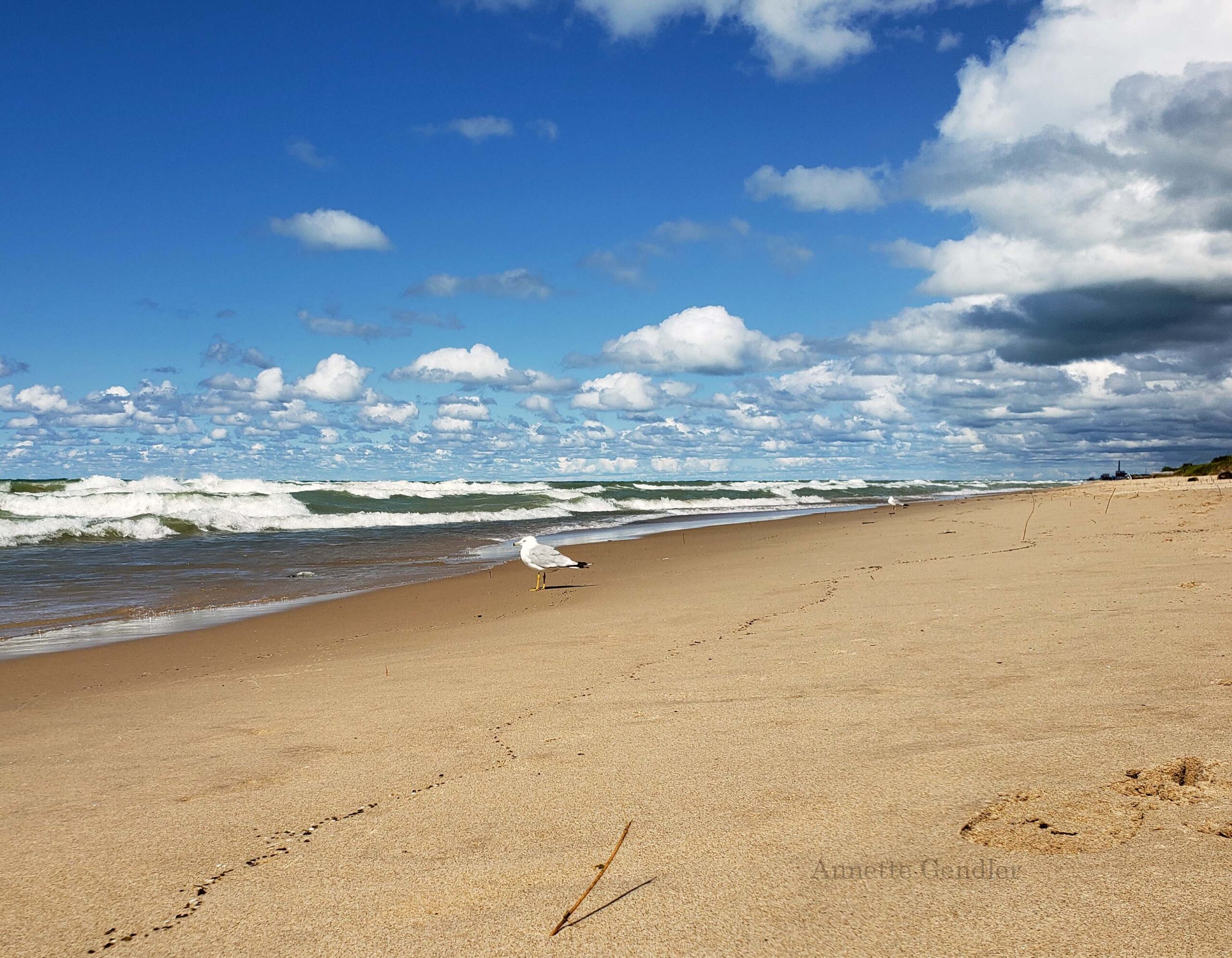 The view from our picnic spot looking east towards Michigan City: Not a soul to be seen. 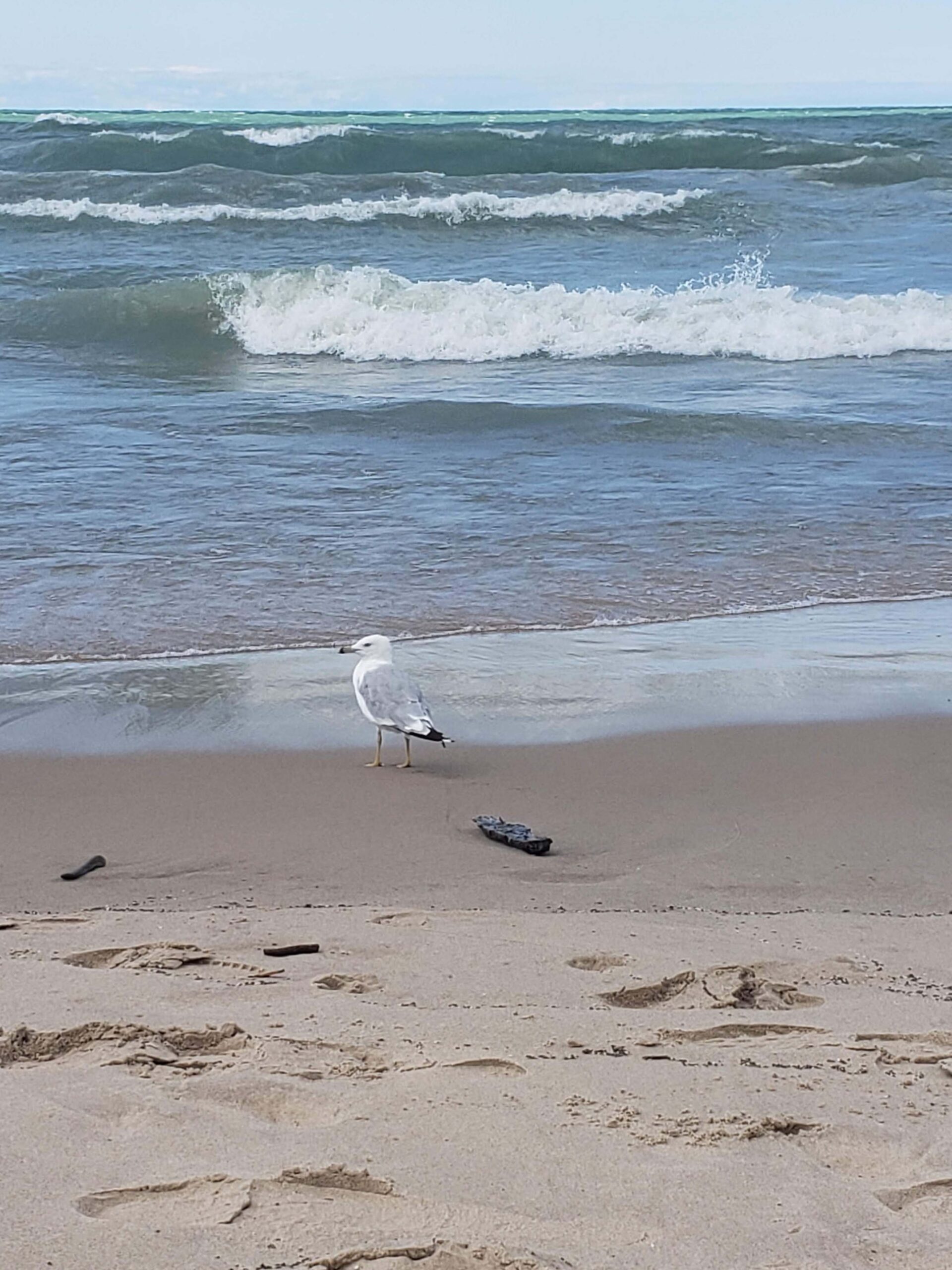 We enjoyed watching this rather well kept seagull mulling around while the waves kept washing that piece of wood around. 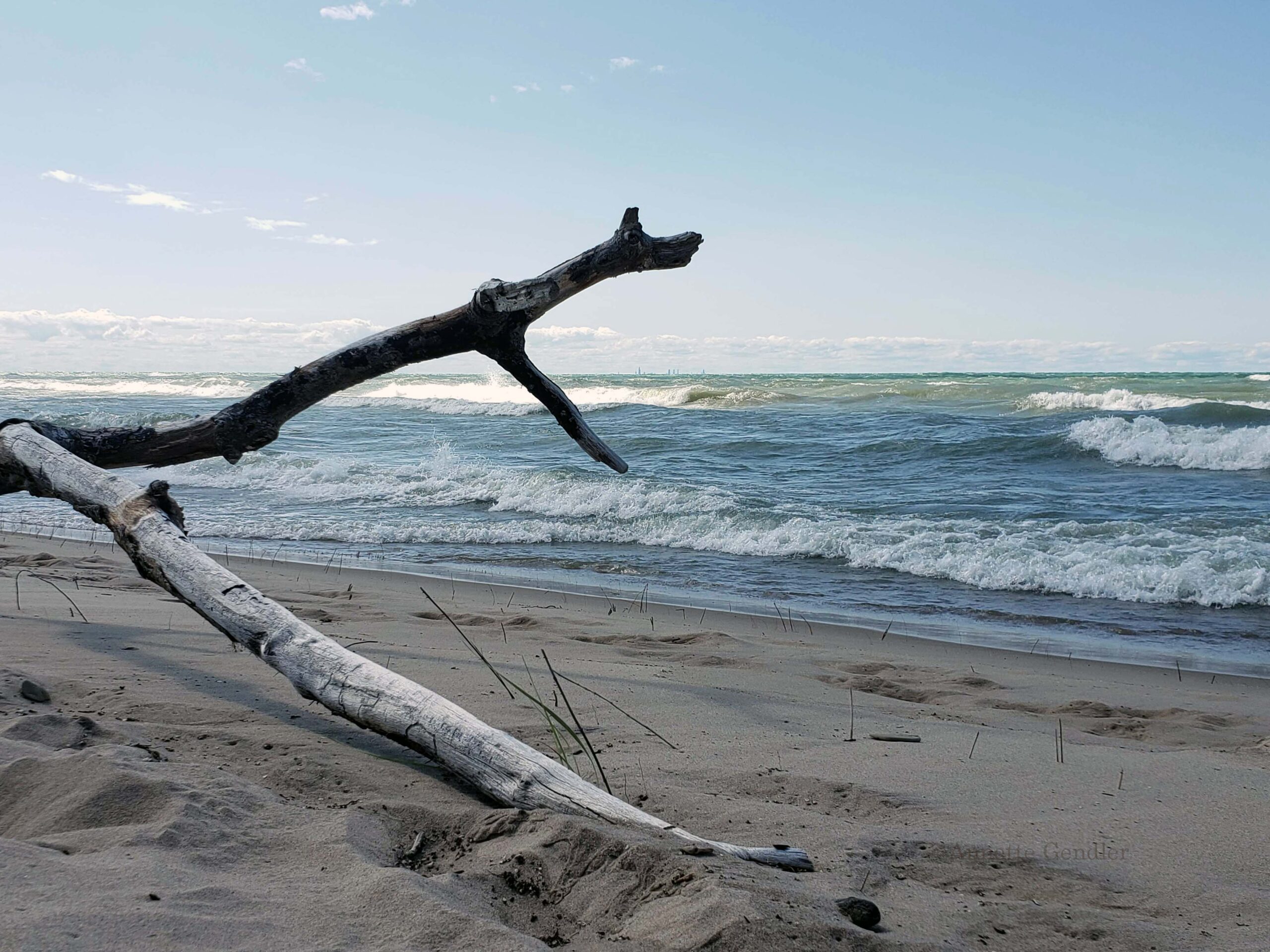 This was our way back: Along the sheer endless beach, sinking into the sand now and then, with the waves thundering to our right, the wind coming off the water… 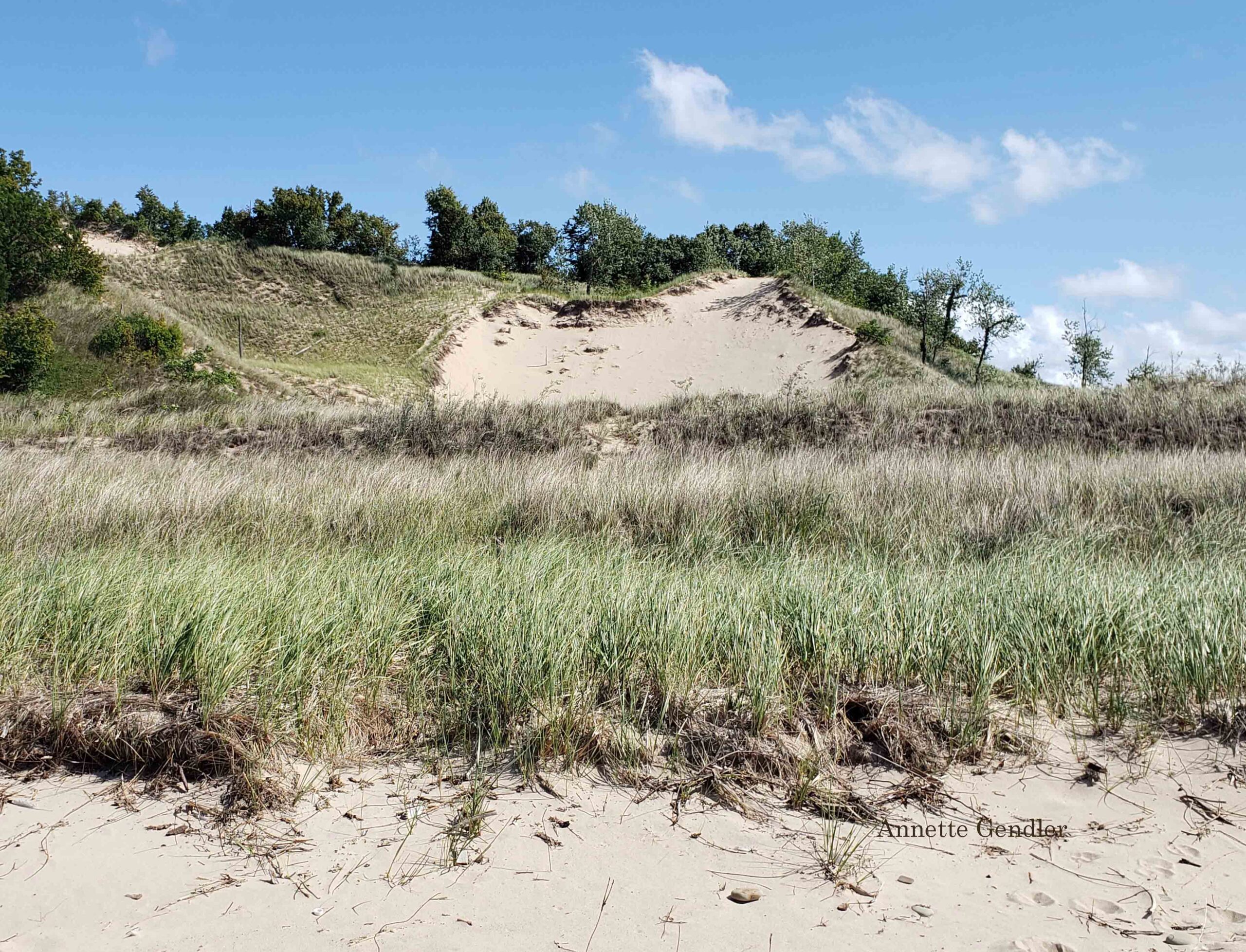 … and the seemingly impassable dunes to our left.

As we walked along, I couldn’t help but look for cool stones. And once in a while I found a fun one like this!

Later on we passed by a family who had put the flat stones (typical of Lake Michigan beaches) to great use. 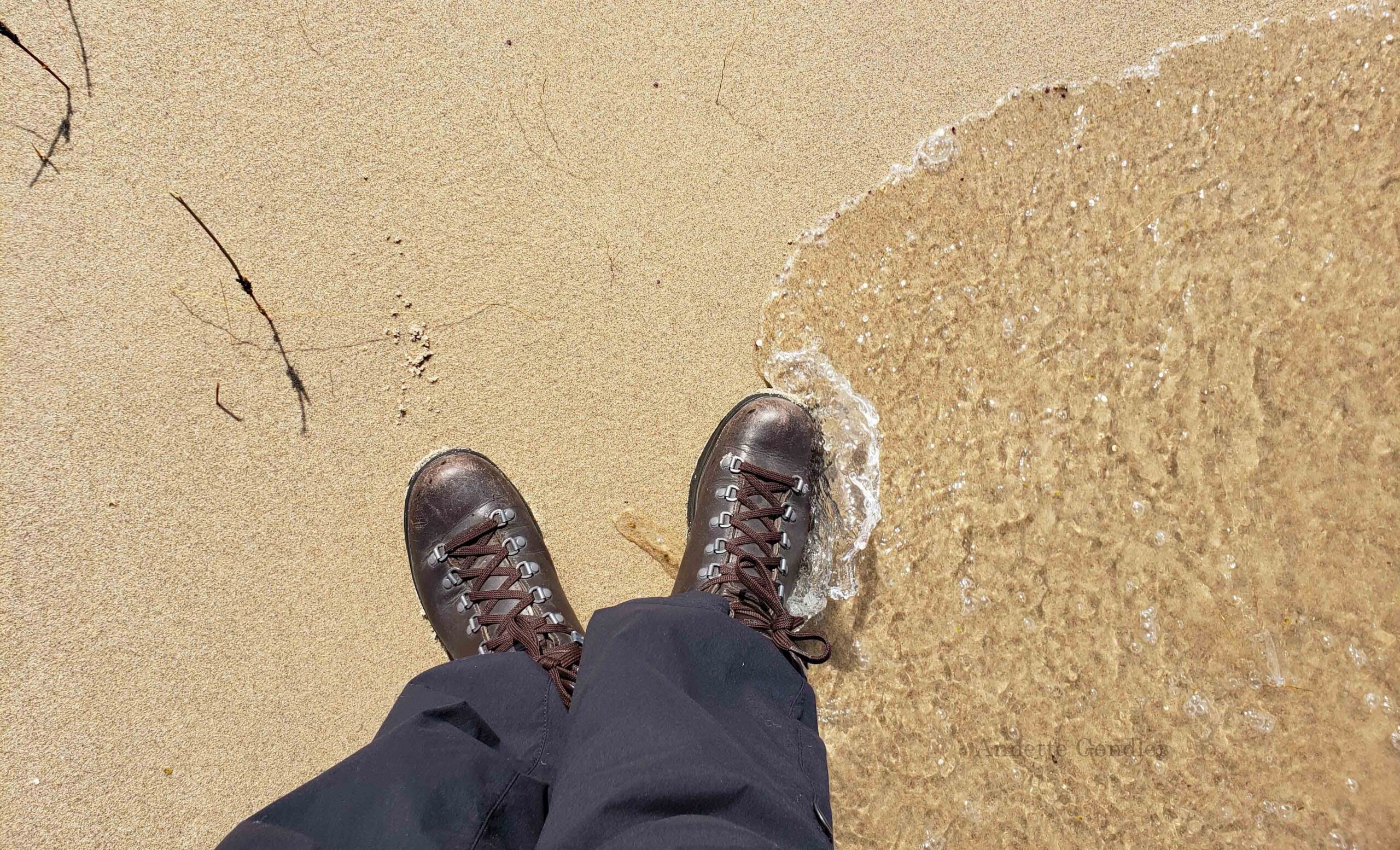 Walking was a bit easier in the wet sand where the water had hardened the surface.

However, I also risked getting caught by the surf. And it happened a few times that a wave sloshed into my right hiking boot!

I even inadvertently caught one such moment as I was recording a video of the waves for my niece. So here’s a snippet of the sound of the waves of Lake Michigan for you…

My wet boots warranted another break.

As we lay there flat in the sand, listening to the soothing sound of the waves, my daughter said:

“This is wave therapy.”

And I replied, “Yes, this, right here, is a piece of heaven.”

We were out there, in the grand outdoors, experiencing nature at its best. We had everything we needed, even if my boots were wet, and we were joyful together. 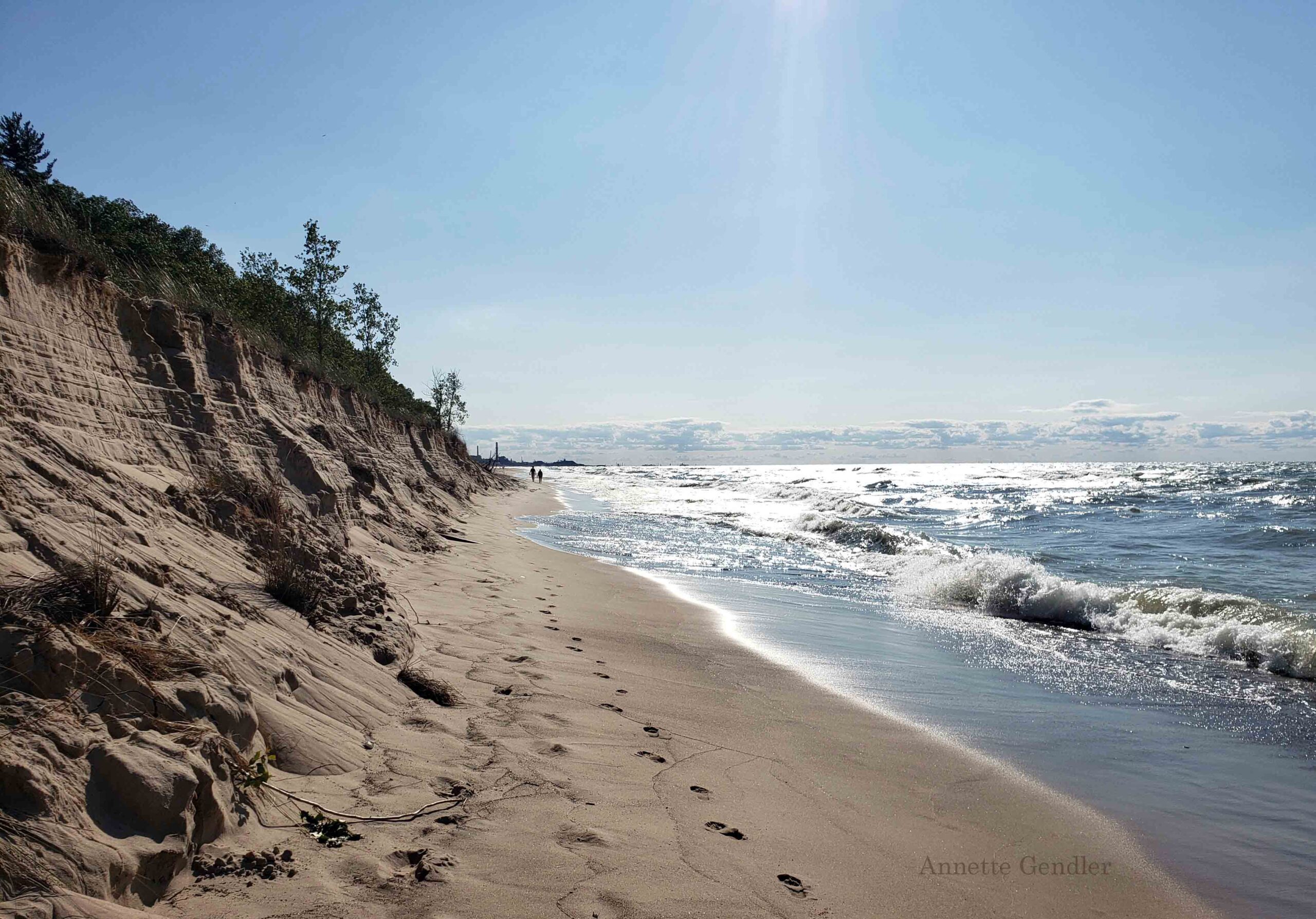 Once in a while, as we hiked on, the stretch of sand got rather narrow.

This beach was such a heavenly place, that it really bothered me when we came across trash. I had a plastic bag with me (initially meant to hold a wet towel in case we ventured into the water), and so we started picking up the trash. Most of the beach trash, it turned out, was party balloons. 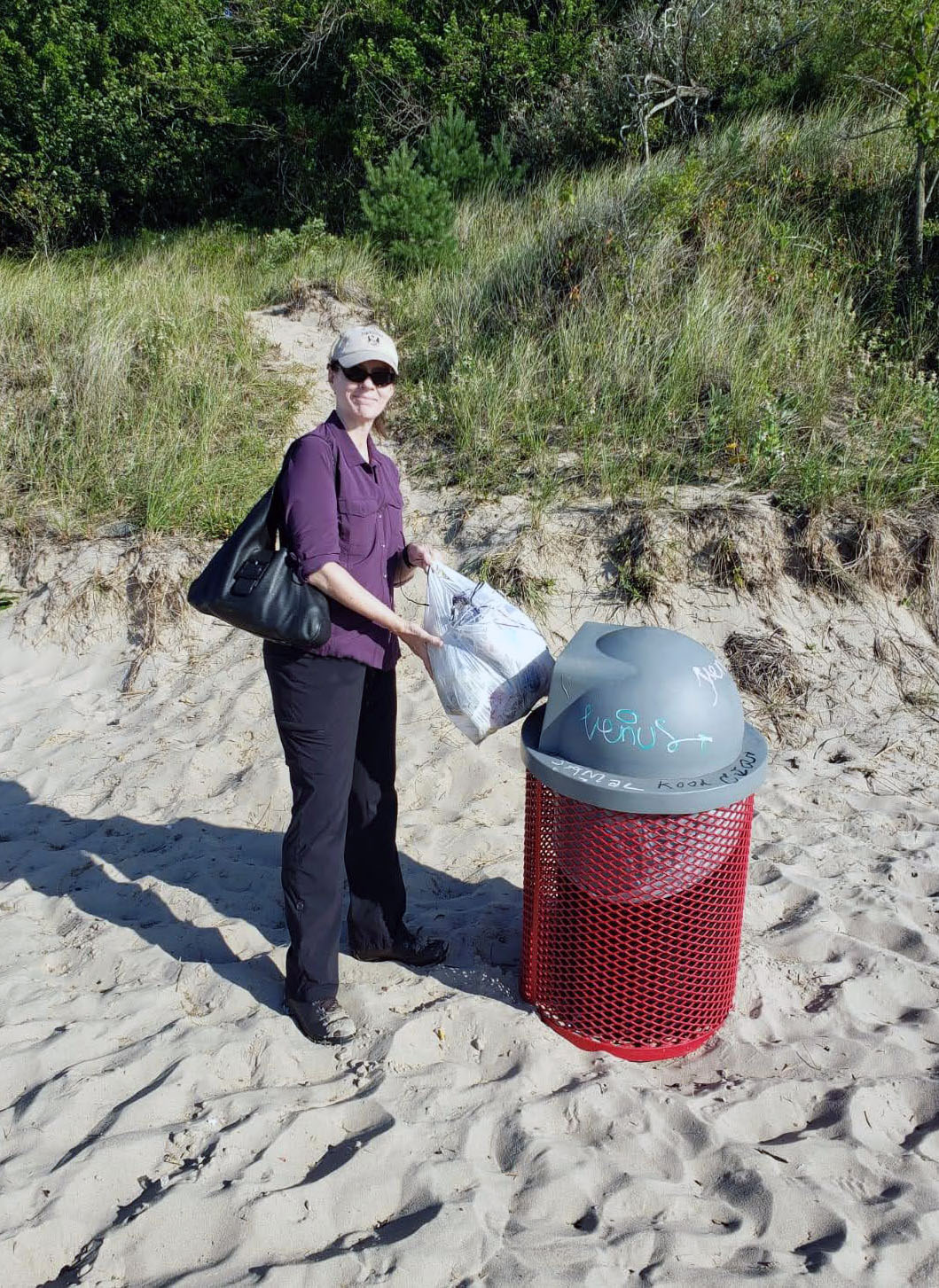 We filled up the entire bag. I was happy to throw it into a garbage bin once we reached the end of our trail at the beach park. 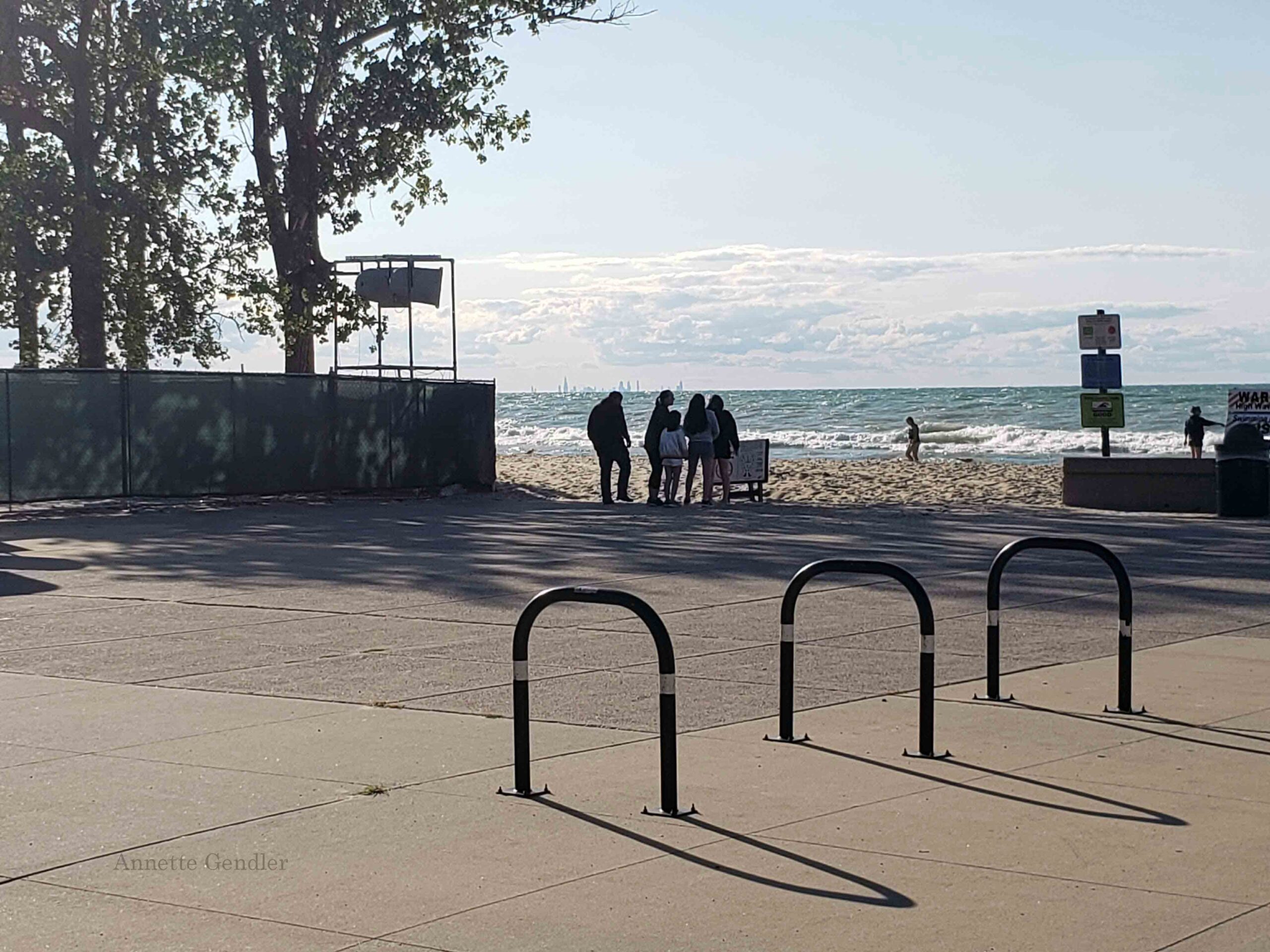 One last view of the Chicago skyline in the distance from the beach parking lot. 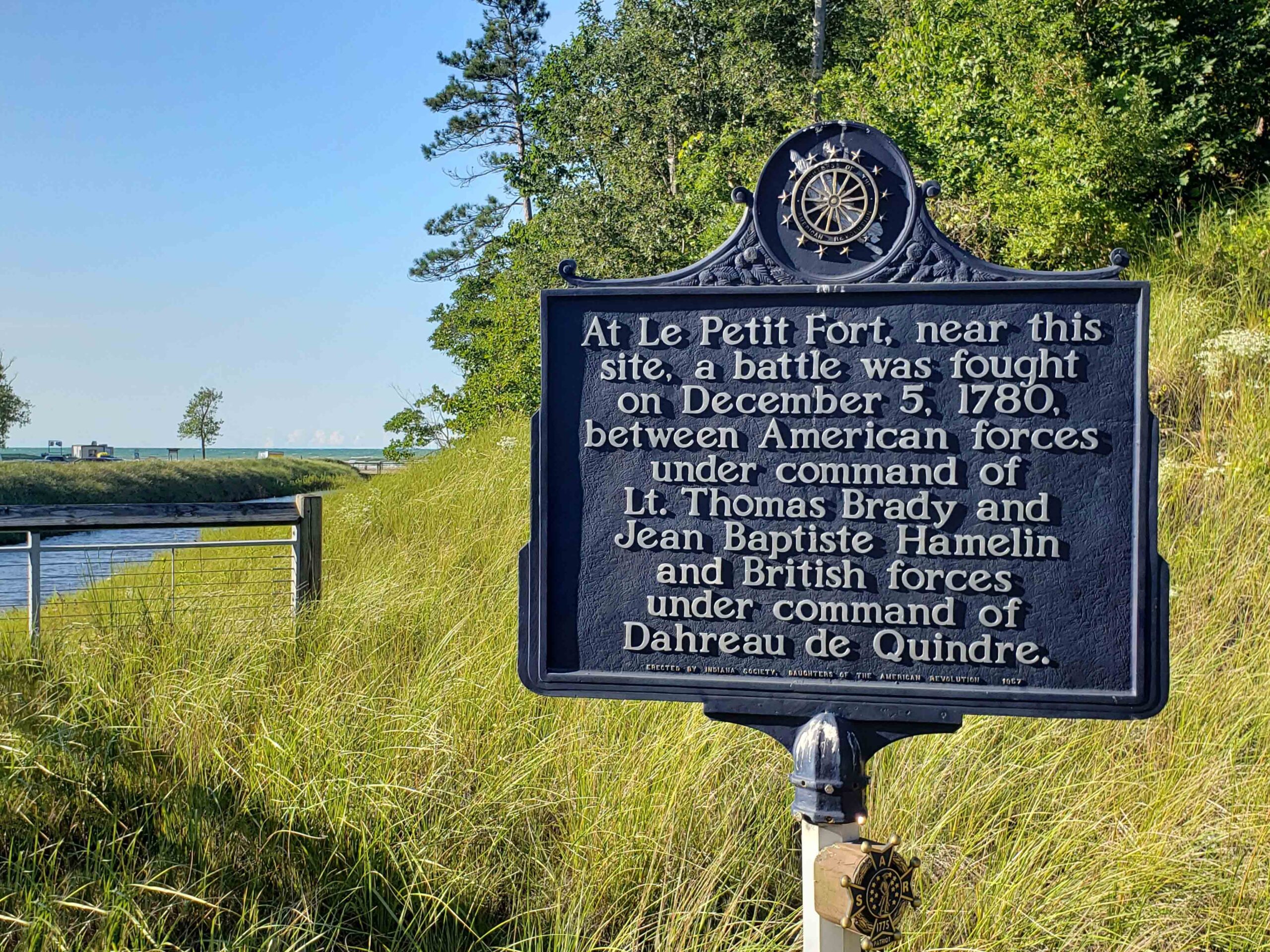 I always appreciate coming upon a historic marker. However, it struck me as out of place to be reminded of a battle in this wildly beautiful place. 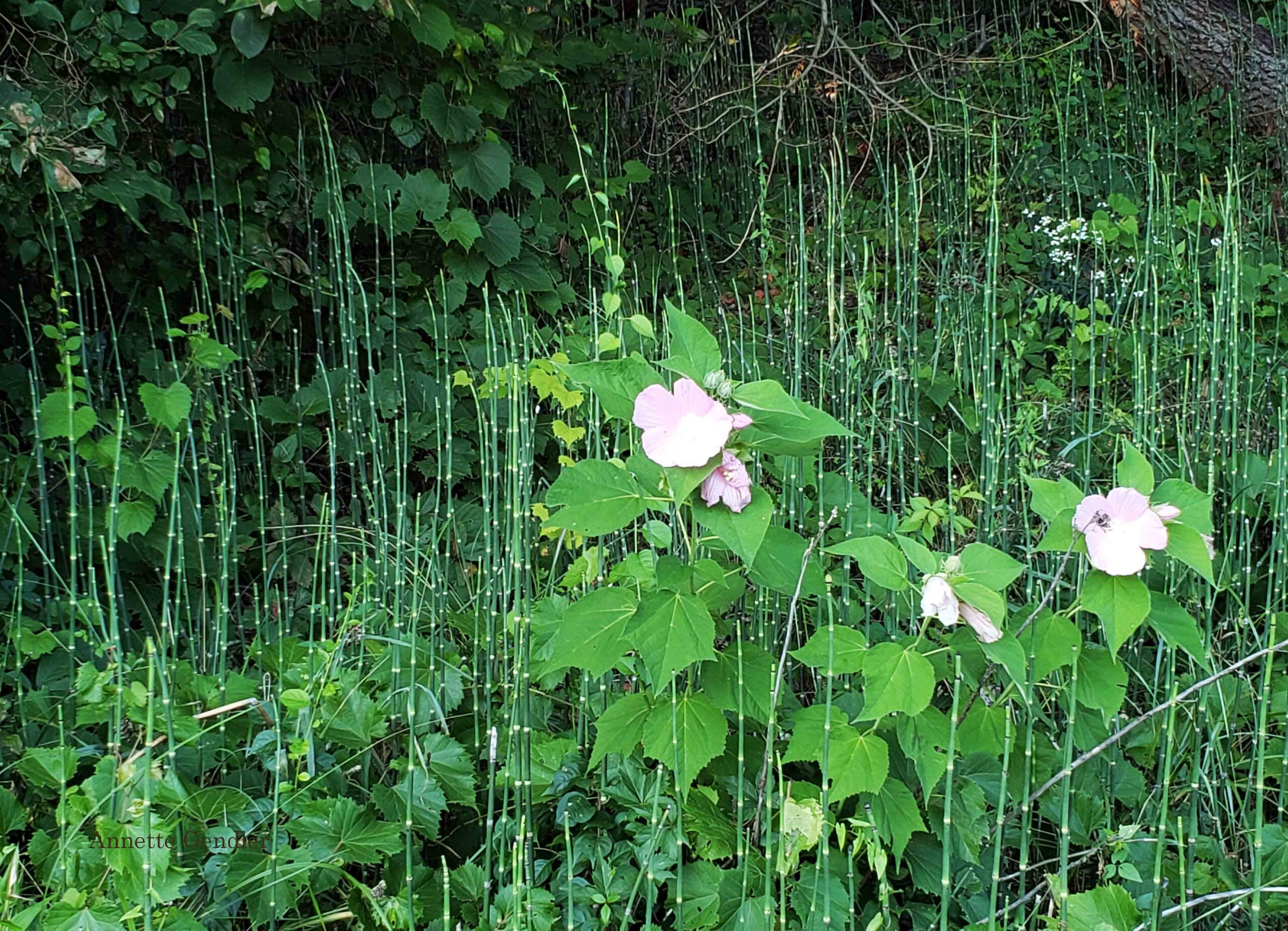 I don’t want to wrap up a post of a serene day with thoughts of battles and trash. So here are the gorgeous pink flowers we happened upon as we walked from the official beach house (currently closed for construction) through the crowded camp grounds to our car at the beginning of trail 10.

It was a beautiful day that I will carry in my heart for a long time, and I hope this post gave you at least a whiff of the wild beauty of a day spent at the Indiana Dunes.