During these Uncertain Times, Trips Down Memory Lane Warm the Heart and Provide an Anchor 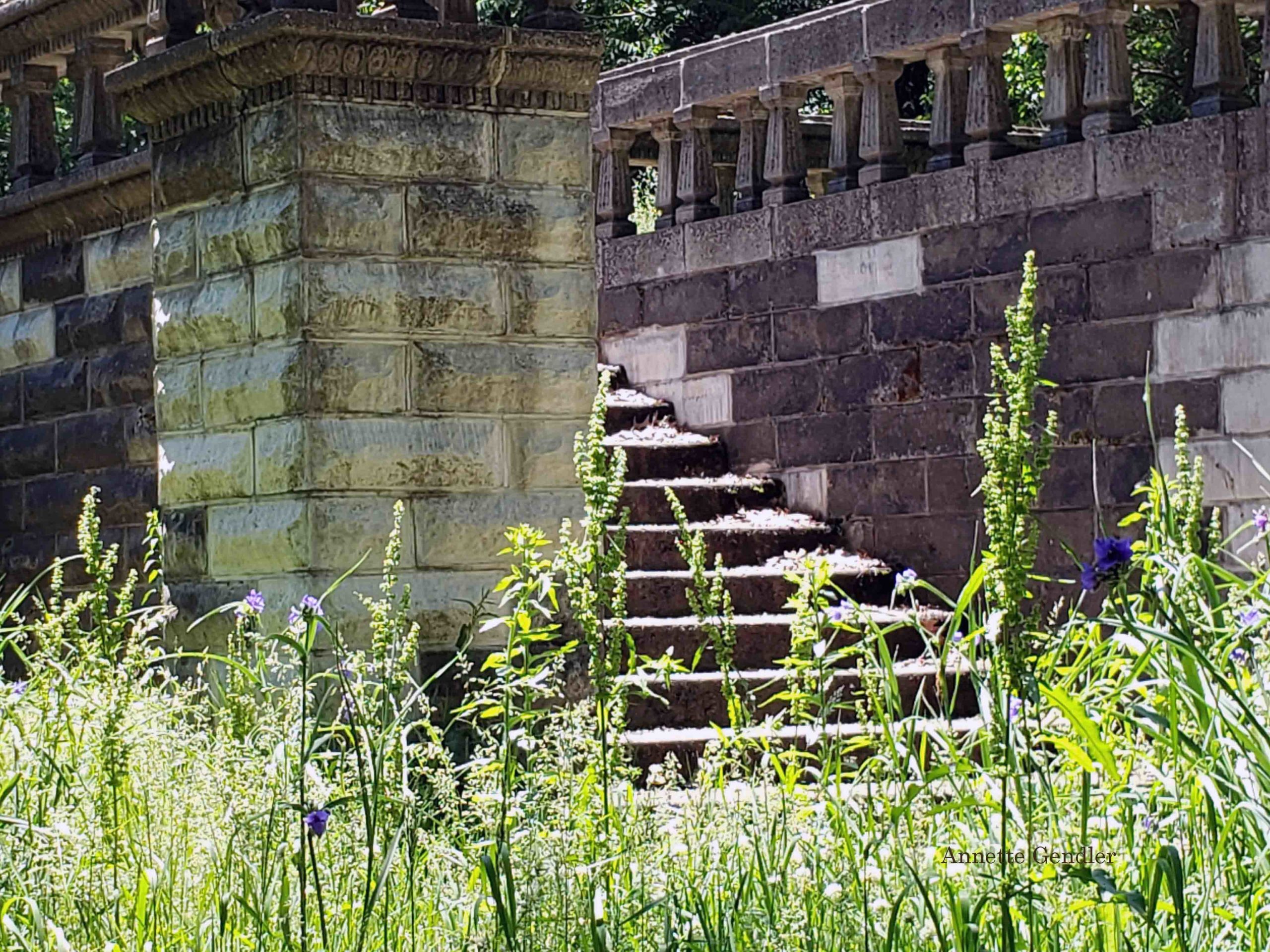 In these days of the Coronavirus Pandemic, urban unrest and ensuing heightened uncertainty, I have found trips down memory lane especially meaningful and calming.

They connect me to my former self of happier times. They also ground me in various aspects of my family’s traditions, experiences and history. All of which is such a welcome anchor.

There are many productive ways to travel down memory lane, such as:

Revisiting a site is quite literally a physical trip down memory lane.

As states in the U.S. gradually reopen, it is, fortunately, possible again to visit many outdoor places.

Last weekend, I inadvertently went on such an excursion. My daughter and I went on our first hiking trip since the Coronavirus shutdown was lifted in Indiana. We had planned to do a favorite trail through the Indiana Dunes National Park to the shore of Lake Michigan. We wanted to picnic on the beach and enjoy the view of the lake’s wide open horizon. Alas, the small parking lot was full by the time we arrived. So we repaired to the Bailly Homestead, Chellberg Farm, and Little Calumet River Trail section of the park.

We knew this area quite well, but only in winter. Pretty much every year, when my kids were younger, we came here for the Maple Syrup Festival, held at the beginning of March (see my blog post from 2012!). I was curious to see what this place was like in the summer, without the bustly attraction of maple syrup production. 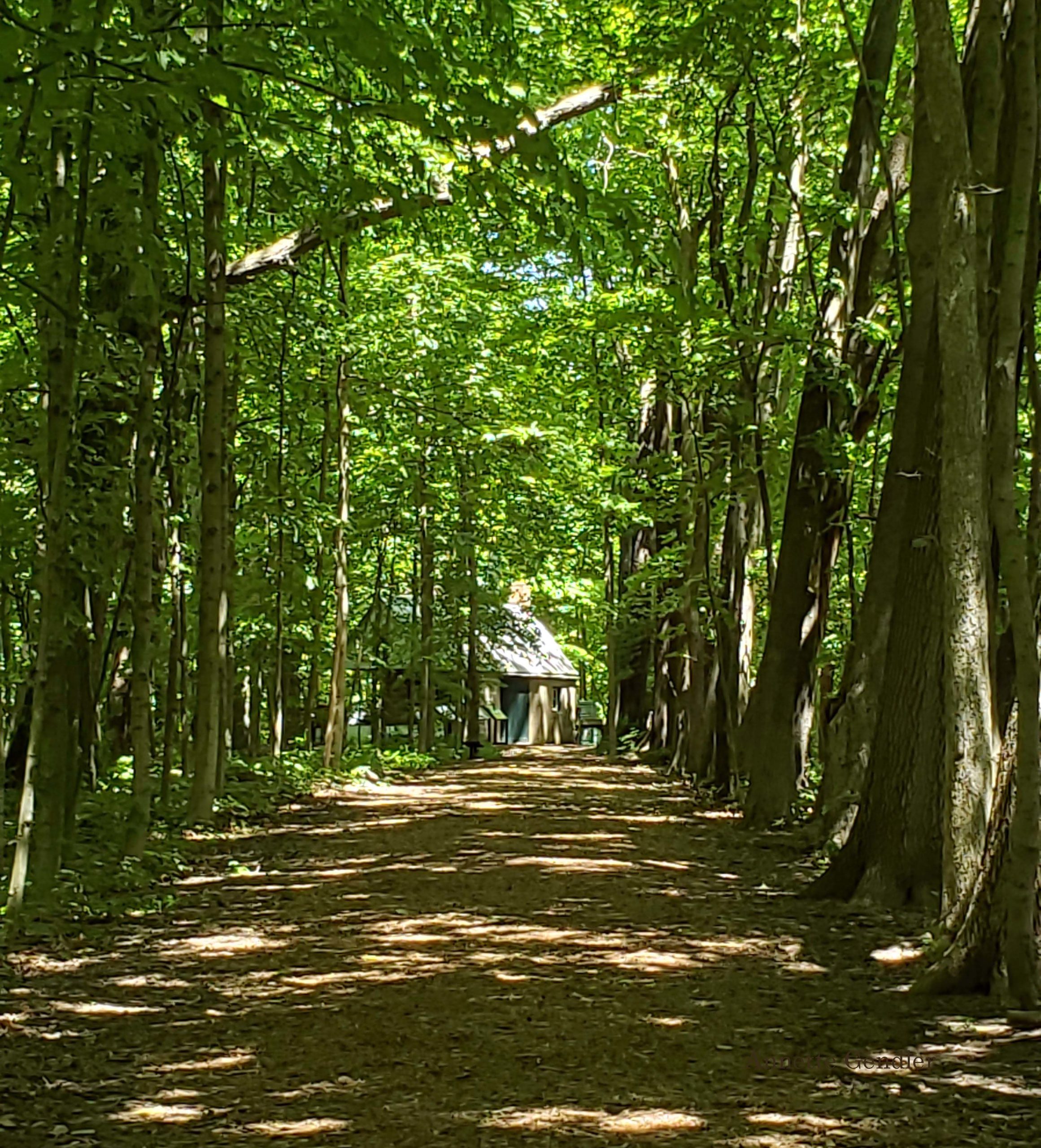 I had only seen this path leading to the historic sugar shack in the barrenness of the March woods. Now the green of summer was almost intoxicating. 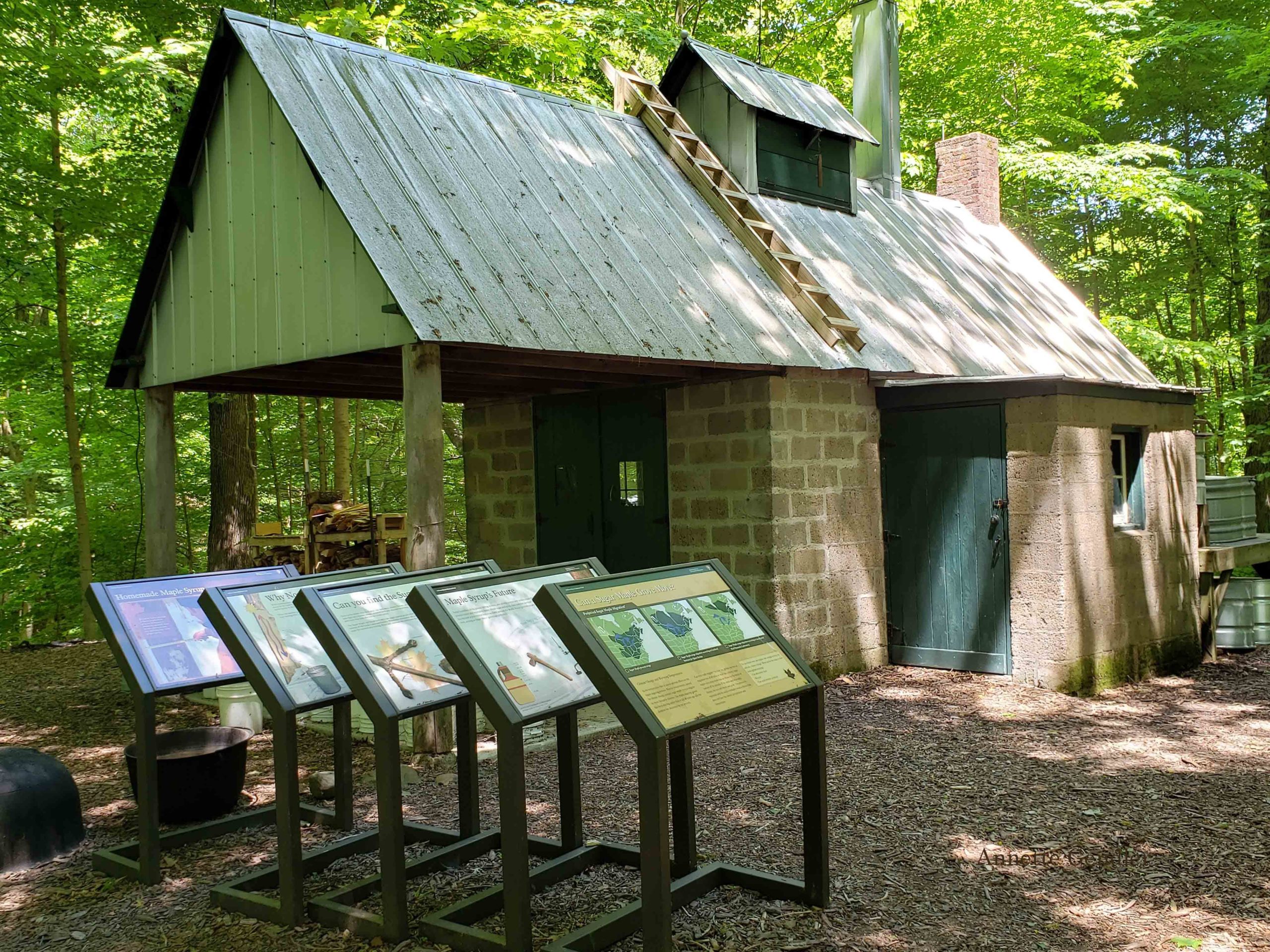 I enjoyed coming upon the out-of-season sugar shack, all cleaned up. Previously I’d known it to be a busy place where vats of sugary sap were boiled down to syrup, see the following photos from our March 2012 visit: 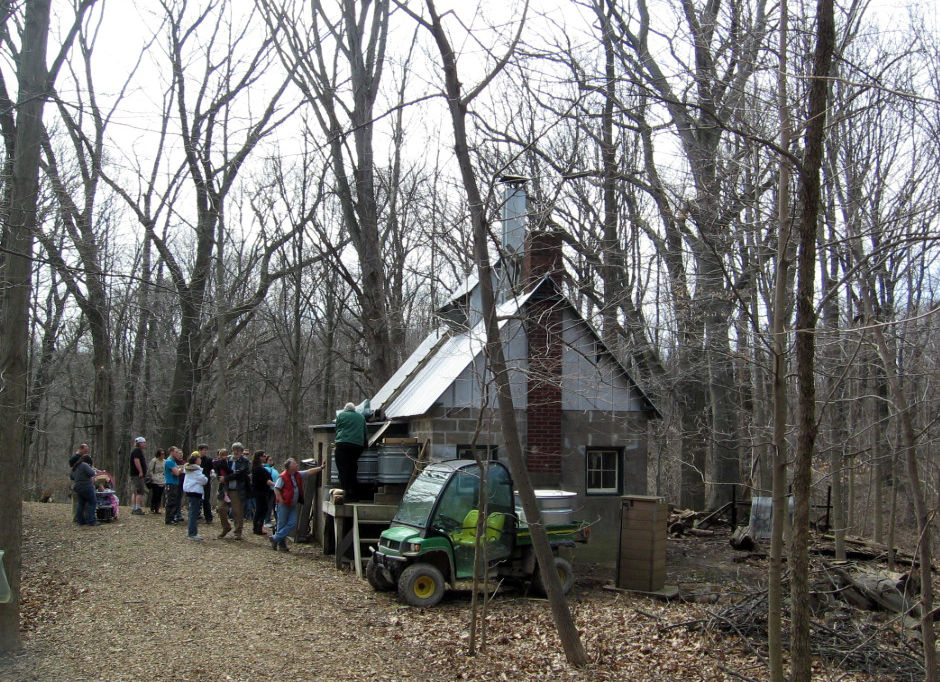 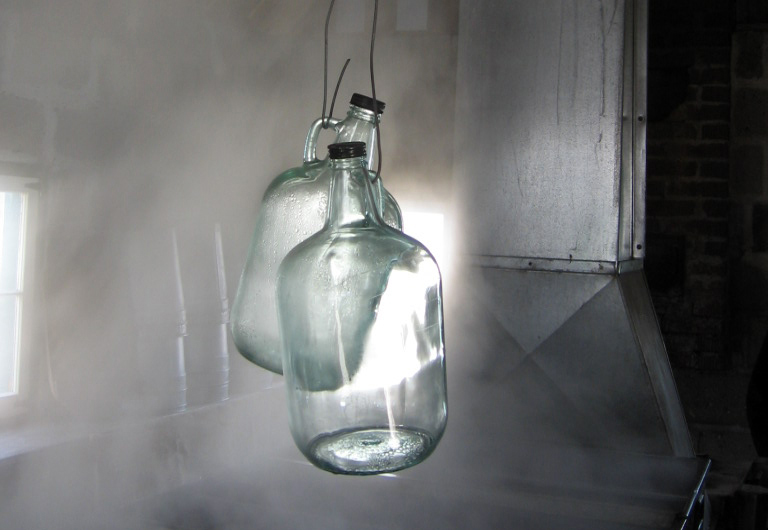 My favorite shot from the maple sugaring operation we’d seen in 2012: Bottles were hung above the steaming vats to warm so they wouldn’t burst when the hot syrup is poured in. 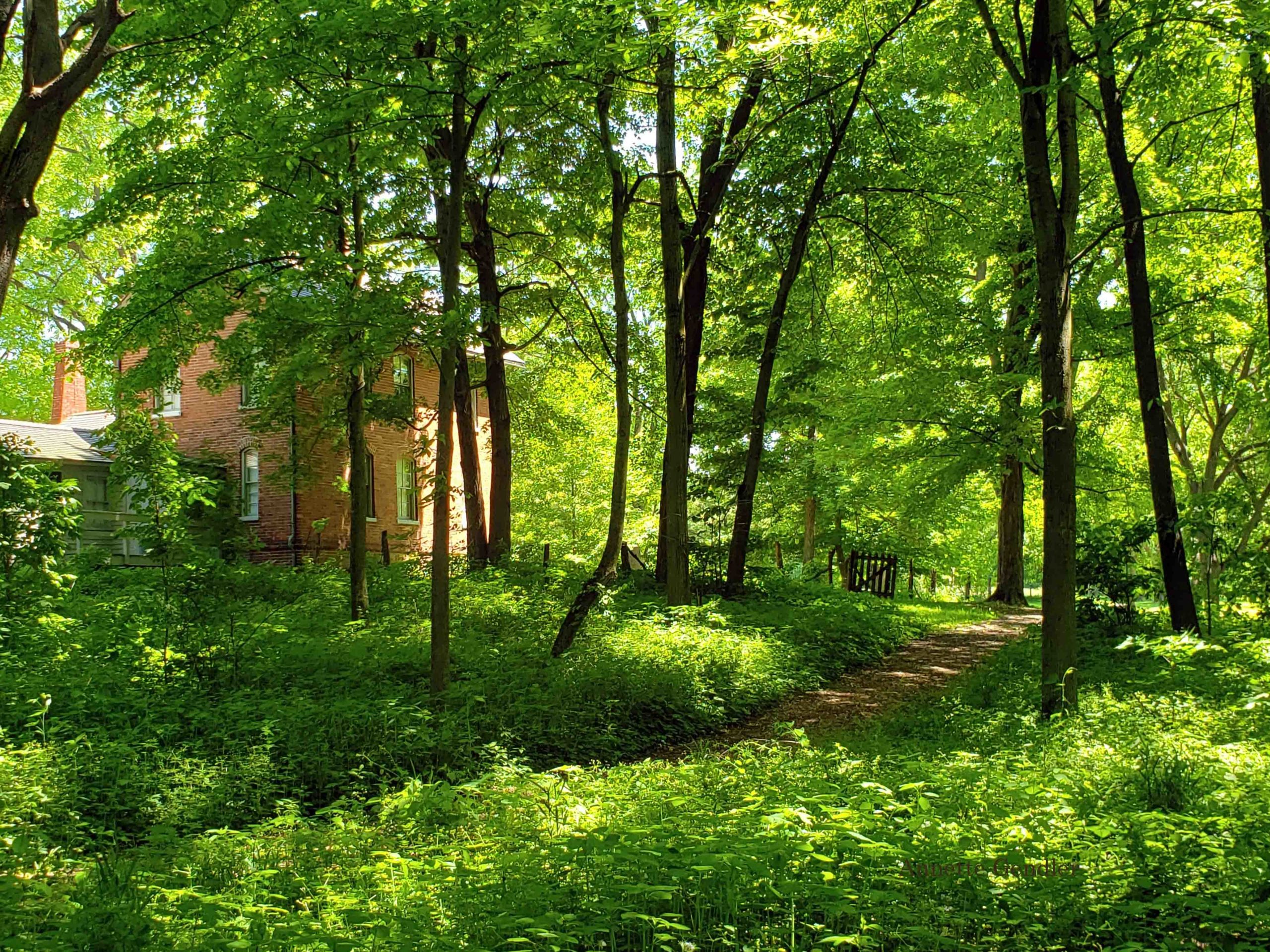 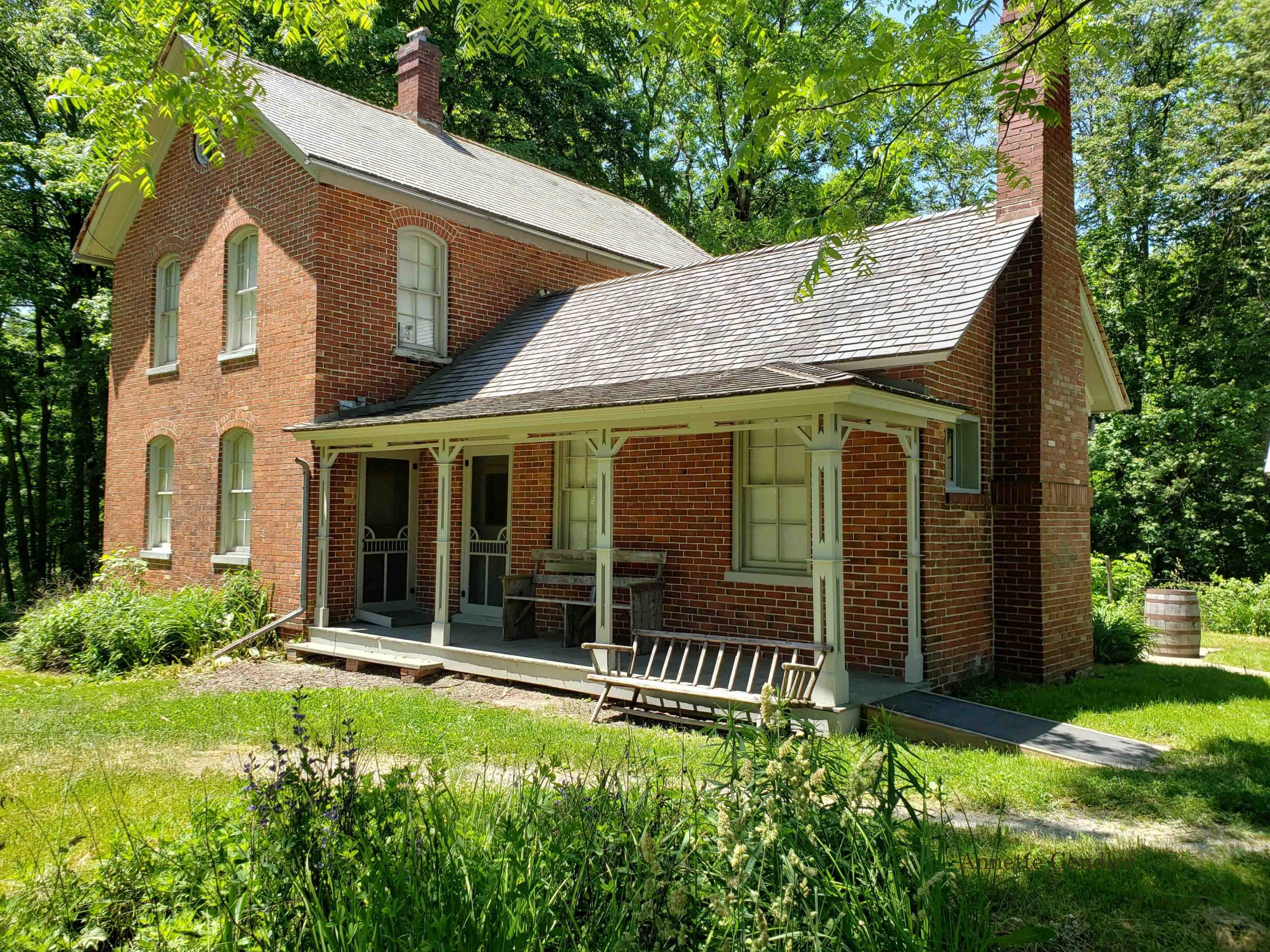 A bit farther up the trail one comes upon the Chellberg Farm. It used to belong to the Swedish Chellberg Family. The house was built in 1885. The National Park Service restored it to its 19th century self. In the summer, it’s closed.

Walking around the farm premises, my daughter and I kept exclaiming, “I remember this!”

It was such fun to experience this place in the glory of summer, without the crowds of the winter festival but with animals about and everything lush.

In the winter, for the Maple Syrup Festival, the farmhouse is open. Rangers in period dress demonstrate 19th century cooking and maple syrup recipes. I was happy to find this photo of the inside from our 2012 visit.

After inspecting the barn, my daughter declared, “If you’re a cow, being one of the animals on a National Park Service farm must be the jackpot!” 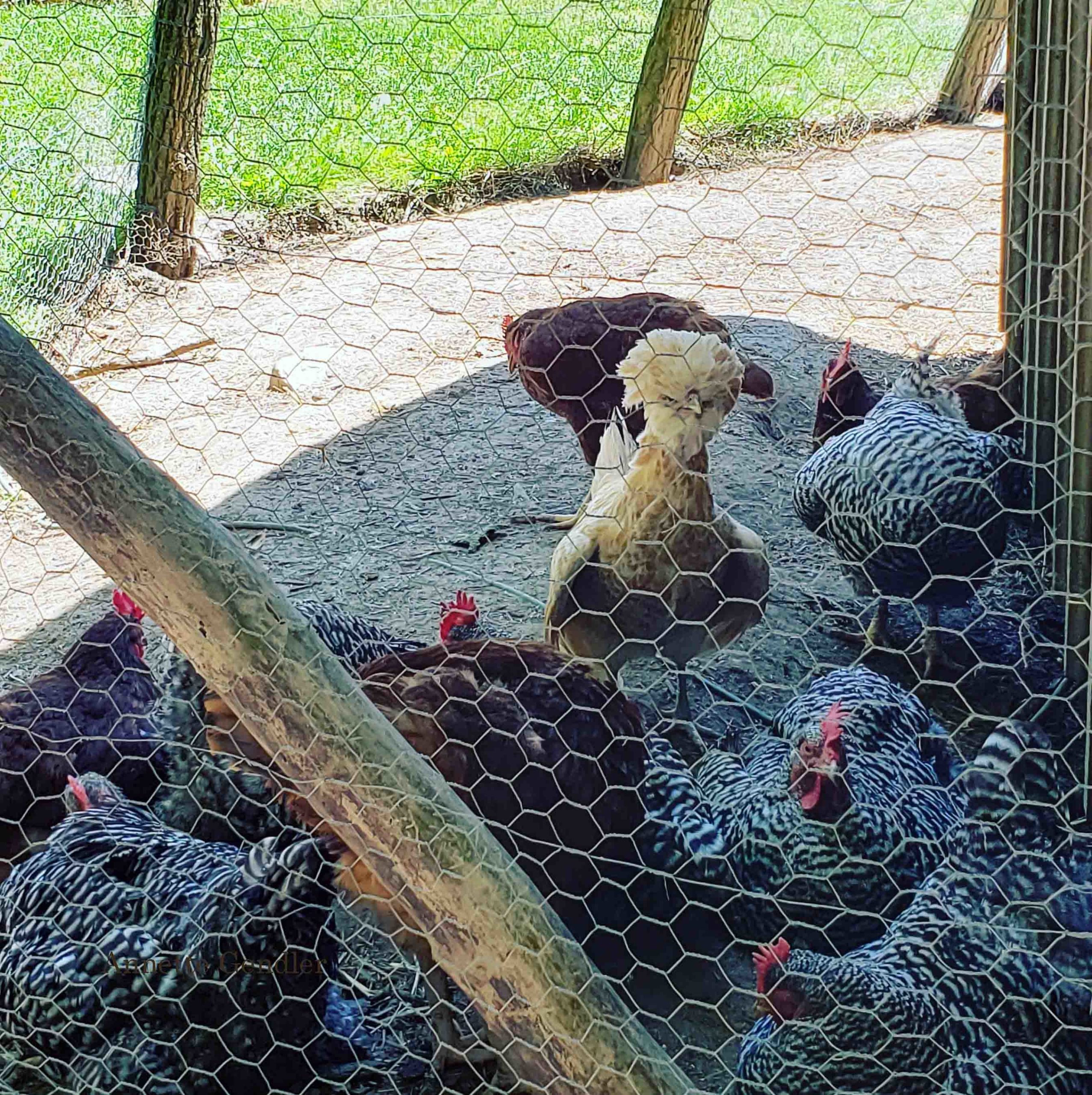 When I sent the above image to a friend, she wrote back, “Clearly the Coronavirus shutdown even had an effect on the rooster’s hairdo!”

After the farm, we headed deeper into the woods, following the signs to the Bailly Cemetery. While we had done the short maple syrup trail many times, we had only been to the Bailly Cemetery once before. I was eager to see it again. It’s the kind of place for which you wouldn’t make a special trip to visit. If you’re already in the vicinity, however, it’s a nice add on.

I remembered we had come upon this wondrous place as snow softly began to fall. It had felt like a magical discovery, this monument of a burial site, in the middle of the forest. 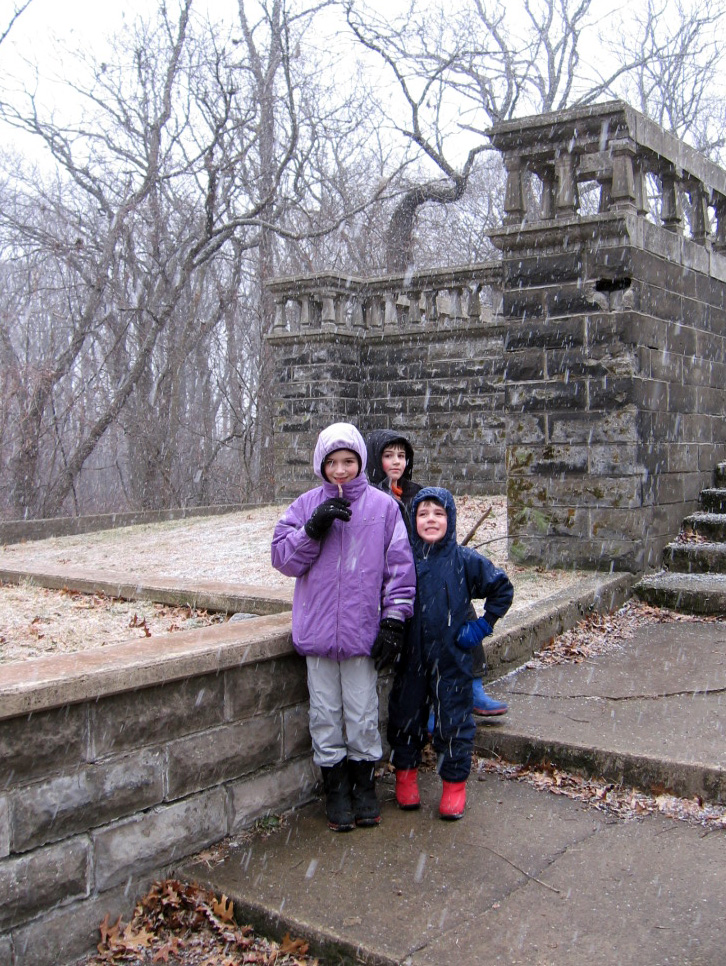 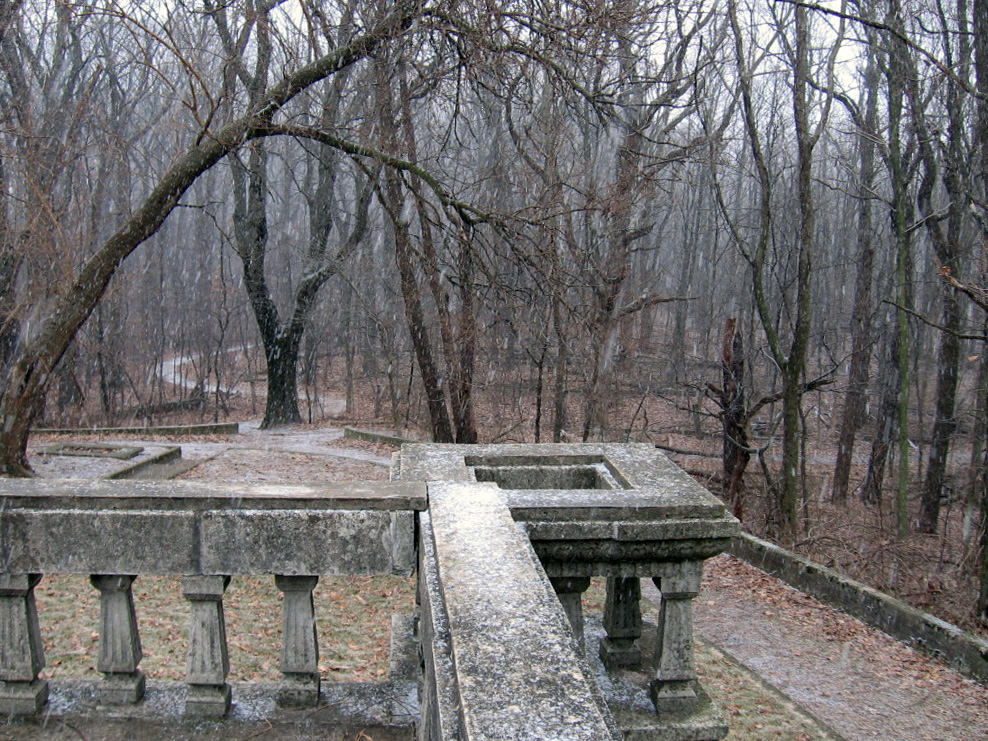 Apparently, back in 2005, I was fascinated by the cemetery’s ornate balustrade, judging by how many photos I found of it in my archive. 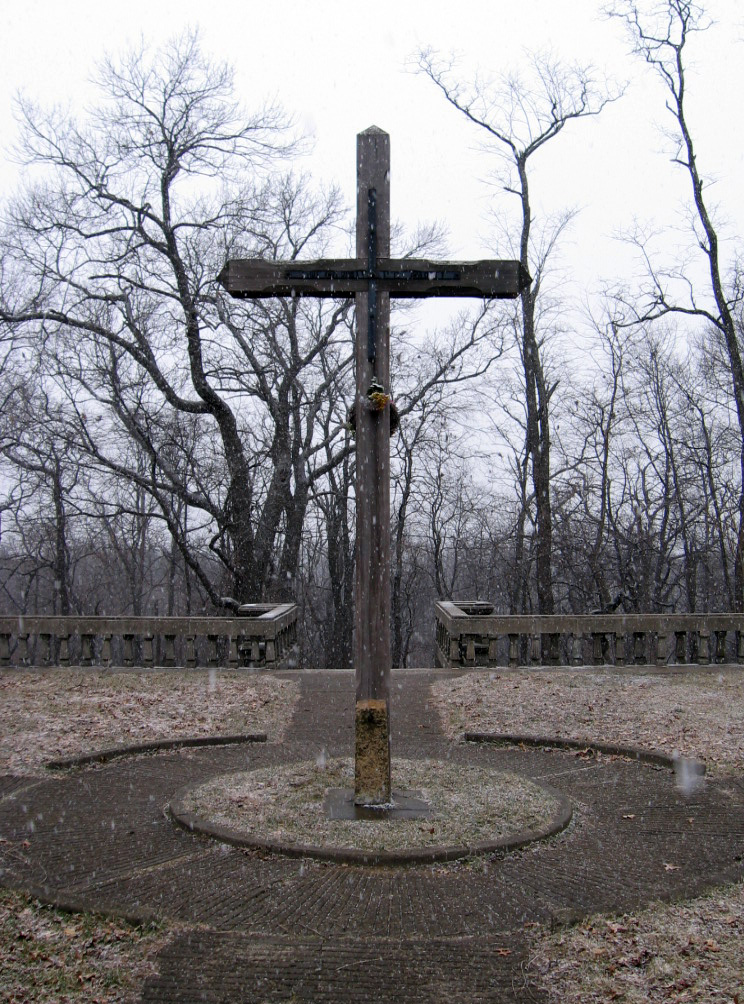 This time around, this cemetery was no less bizarre, but the unkempt grass and weeds made it appear less majestic. 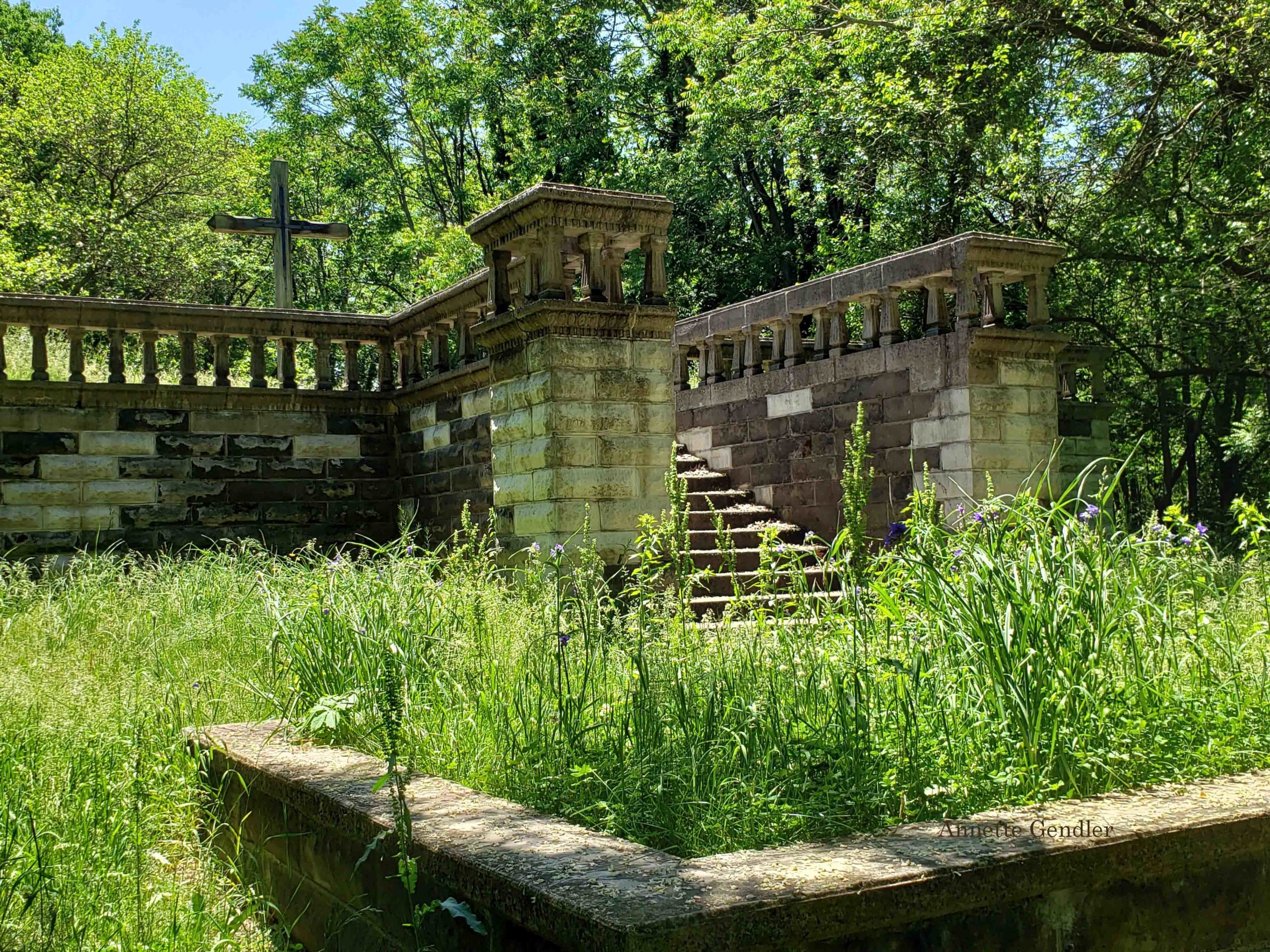 The Bailly Family first used this plot in 1827 to bury their son, but earlier graves were detected. 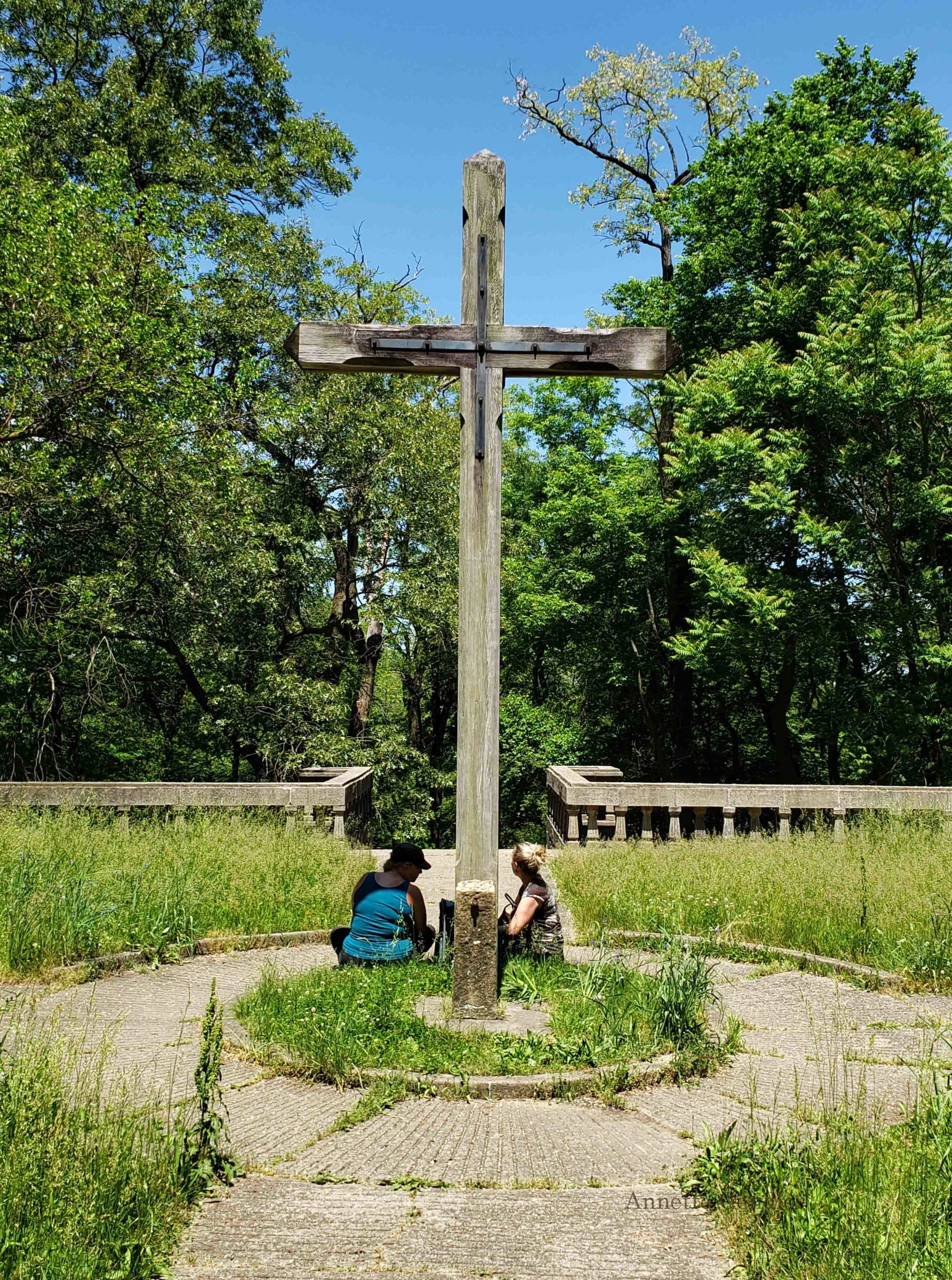 Why two fellow hikers chose the base of the cross as a picnic spot is beyond me. To boot, this was out in the blazing sun!

This is how the Bailly Cemetery first appears when you come upon the clearing in the woods.

After my daughter and I returned home from this summery expedition, I dug through my photo files. I was happy to find that I had captured our visit to the Bailly Cemetery in the winter of 2005. My photos confirmed my memory of that first visit: Snow flakes slowly dancing down while we stood marveling at this ornate grey burial site in the Indiana woods.

That’s another good reason, by the way, to document your every day and your trips, big and small: Those photos let you relive that point in time.

Often they either confirm your memory, or they correct it, or they remind you of something you had forgotten. In any case, they are priceless records and I invariably find I should have taken more!

I found that in retracing my steps and re-experiencing this place, I got a chance to come full circle, to feel grounded in old experiences and yet find them refreshed.

The past felt meaningful, not lost in the stream of time. And the present was filled with the joy of this rediscovery.