I Always Wanted To…

As my contribution to the Field Guide to Everyday Magic Blog Hop, I’m sharing how I finally did so because

I have found that making magic happen is often a matter of following through and actually doing what I said I wanted to do.

I’m thrilled to be participating in this blog hop organized by Bella Grace Magazine in celebration of publishing their Field Guide to Everyday Magic. For a chance to win a copy, please think about what you’ve followed through on (or really need to!) that brought a bit of magic and light into your life, and leave a comment down below. Make sure I can email you! This contest remains open until end of day, August 15. (International participants are eligible to win a free digital edition of Bella Grace.)

So, I always wanted to see the Montfort Castle in northern Israel; I have a thing for the medieval castles of knights, perhaps because I grew up visiting all the castle ruins along the Rhine with my grandmother. Even though I’ve been to Israel many times, I never made it to Montfort.

This Crusader ruin is remote, in the mountains of the Upper Galilee, close to the Lebanese border.

None of my road trips ever took me close. Well, my first trip to Israel kind of did but my husband (boyfriend then) was in charge of itinerary details, while I simply insisted that it would be cool to travel along the border with Lebanon, given that this was 1986 and the first Lebanon War had just “wrapped up.” This 1986 journey along Israel’s borders is chronicled in the “Israel” chapter in my book Jumping Over Shadows.

In any case, on my most recent trip to Israel in July, I resolved that, during a stay in Tiberias, we’d make a day trip and visit Montfort. We = my IDF soldier son and me.

Now the problem with this plan was that my son is not as much into hiking as I am, but he was willing to indulge his mother, so off we drove to the Upper Galilee… 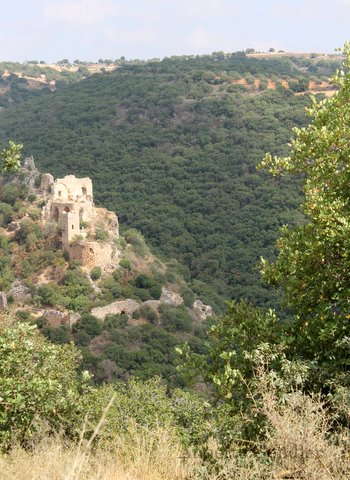 Another problem with my plan was the Israeli summer.

Not that I didn’t know about that, but the weather forecast predicted it wasn’t going to be exceedingly hot, i.e. “only” 28 to 30C (86-90F). In Israel, in the summer, that’s not exactly hot, but it is hot! As soon as we got out of the car in the blazing sun and spotted the castle from the parking lot, my son began arguing that this was good enough. No way did it make any sense to hike down the valley and back up again in this heat, only to poke around a few old stones. Plus, you can see everything you need to see on Google. Oh yeah? but you can’t experience it, I argued.

Ah, no, I was not going to back off now, and so we made our way down the trail. I loved how the view of the castle changed as we got lower into the valley. I kept busy with my camera, while my son stumbled ahead. 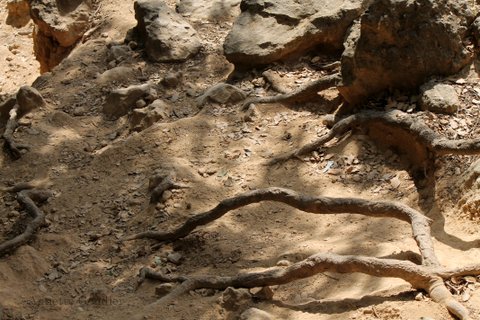 Mind you, the trail was rough and involved a lot of groping from rock to rock. I had to pay careful attention to where I placed each foot.

Half way down, as my head heated up, my heart beat faster, and I was wiping the sweat of my brow, I started wondering: Should we turn back? Was this sheer madness?

I had suffered heat exhaustion two summers ago in Israel, and I did not want to repeat that experience. Were my thighs strong enough to make it down this rocky trail, up on the other side and repeat the whole thing to get back to the car? Did we have enough water? The trail description said the hike was less than an hour, so it sounded doable. But was it? 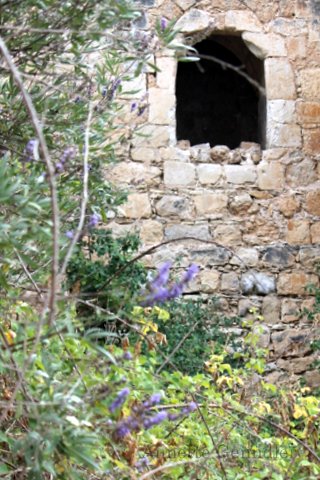 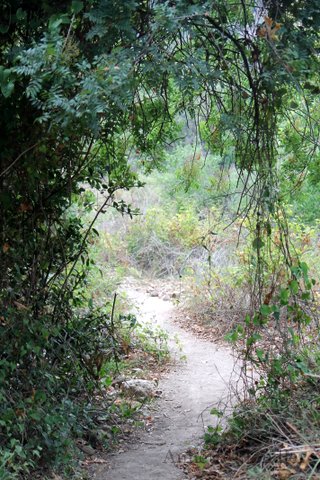 A ruin of what looked like a customs house met me in the valley (Yeay! I made it to the bottom!), but the river bed was dry. No refreshing water in sight! Around a bend I found my son sitting in one of the few shady spots. He was sucking water out of his Camelback and seemingly on strike: “This is what I do in the army all day! Sweat and be hot!” Was I being unfair? Ruining his weekend off?

I wasn’t sure if he would keep going, but I pressed on.

Now that I’d completed half the hike there, I was going to go all the way up, even if I had to stop every few minutes to let my thumping heart quiet down and sip some water. All the while I wondered whether I would regret having stuck to this adventure, whether I’d end up in bed with a massive headache for the next two days. 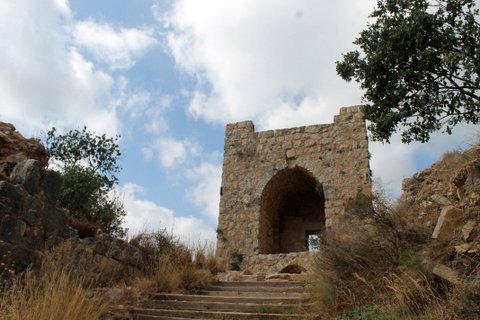 I climbed the rest of the way alone in the snickering heat. It was so hot I felt I could hear the heat. And then, finally, my first glimpse of reaching my destination. 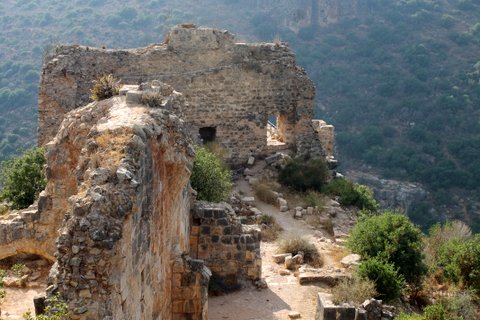 In the fortress I found a spot where I could sit in the shade of a column. I leaned against the old stones, unwrapped the pastry I had brought along from the hotel breakfast buffet, gulped down my warm water, and tried to take in this view. As I sat there, I wasn’t sure if my son would ever join me, whether what was supposed to be a fun family hike would end up in a quagmire of uneasy feelings.

But, I was also proud of myself. I had made it! Sitting in a shady spot in Montfort was a little physical triumph. Life, after all, is not lived on Google. 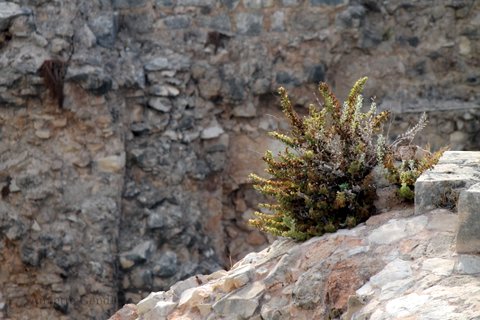 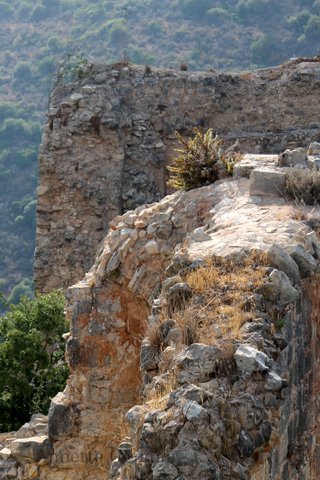 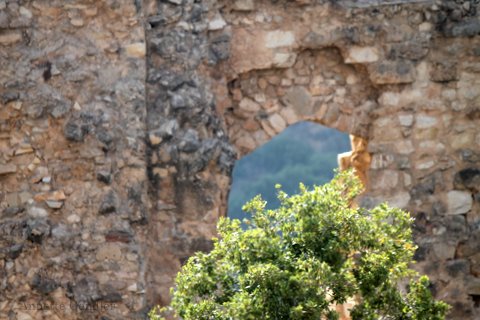 Slowly, my body cooled off a bit, and guess what? My son showed up with a smile on his face! He joined me on my perch, and we had an amiable picnic, talking about old stones and the sheer craziness of those Teutonic monks who fortified this location back in the 12th century.

My heart was wide with joy at our good fortune of having the luxury to spend a day together on a somewhat crazy quest and thankful for being able-bodied enough to undertake it.

Then, somewhat recovered and feeling human again, we poked around. At this point there was no one else up there besides us! Seriously, we only ran into one other hiker and a bunch of kids up there. 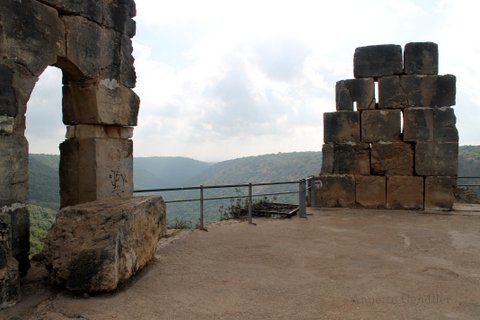 Beyond these mountains, we felt we could see the Mediterranean glitter on the horizon, but we weren’t quite sure. In this picture it disappears in the afternoon’s haze. 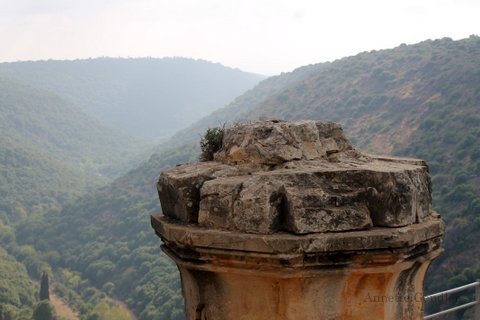 The terrace jutting out onto the cliff with its massive columns reminded me of Masada, an even more unlikely location for a stately castle. 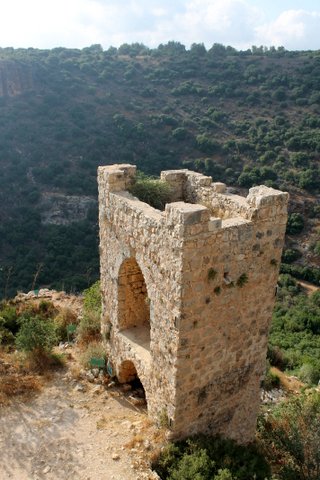 And then, the hike back was still awaiting us. We had to get all the way back to the parking lot with its viewing terrace, which is basically that reddish outcropping you see on top of the ridge on the other side, straight up from the tower in this photo. Alas, off we went, me reasoning that it wasn’t going to be as bad, even though I was low on water, because the other side of the mountain would be in the shade by then. (It was.) 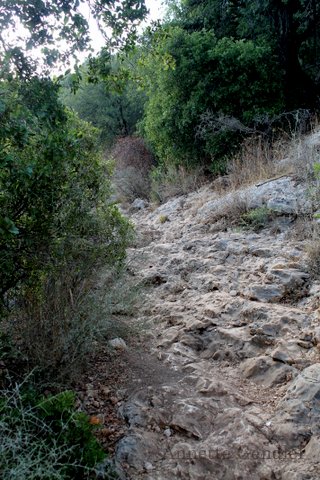 This is the rocky trail back up. 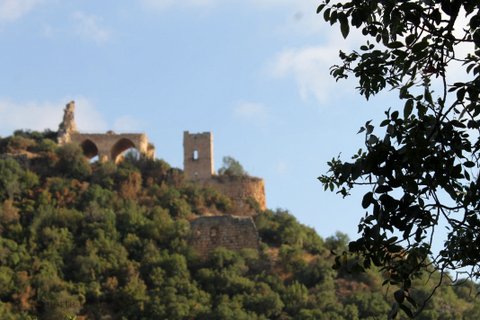 On the way back, we had even better views of the castle in the glow of the afternoon sun. My son was in a much better mood now. I have often found that to be the case, not just with him but in general:

Once we’ve accomplished a goal, however harebrained it might have been, we feel good about ourselves, and we don’t doubt the world as much. That’s a feeling you can’t get from Google either.

He hiked ahead, but waited for me patiently at safe intervals, sharing his water. As we hiked up the last few steps to the parking lot, out of breath but pleasantly exhausted, he said: “Now that was a good day’s exercise!”

I’ll be damned, I thought, happy that I had stuck to my original plan. And: I made it to Montfort.

PS: Don’t forget to leave a comment about how you stuck to your guns (or will!) for a chance to win a copy of the Everyday Field Guide to Magic!